You are here: Home / Europe / Ukraine publishes names of Russian pilots flying combat missions in Syria against the Islamic State 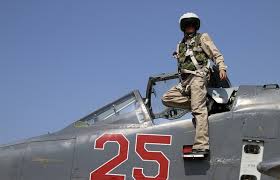 The publication in Ukrainian mass media of personal data of Russian pilots flying combat missions in Syria against the Islamic State (IS) shows that Kiev government authorities as accomplices of terrorism, dennounced a military source in this capital today.

The president of the Russian military retired association, Mej. Gen. (R) Alexandr Tsalko, said today that the provocation in Internet was revealed by Anton Gerashchennko, deputy and advisor of Ukraine’s minister of Interior.

Gerashchennko recently made a call to the media to publish in the Internet personal information of the pilots flying combat missions in Syria, in response to a request made by the constitutional Government of that Arab country.

The day after the call, the Peacemaker website made public in Russian, English, and Arab the information about the nine Russian top ranking military pilots, reported TASS.

The same website reached notoriety before through the publication of two opposition members to Kiev regime Oles Buzina (reporter) and lawmaker Oleg Kalashnikov, who were assasinated later near their residences, added the sources.

Tsalko slammed Gershchenko’s actions and said that Russia’s Investigation Committee opened a file against him for inciting terrorist activities.