You are here: Home / Europe / UK troops to smash migrants trade in Libya: Britain is poised to send 200 Royal Marines to the Mediterranean 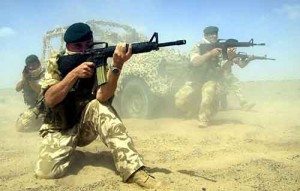 The move, which would see the UK spearhead a multinational operation off the coast of North Africa, comes amid claims that Islamic State fanatics are using the refugee crisis to smuggle fighters into Britain and Europe.

The UK’s leading role in the blockade was described as the “quid pro quo” for David Cameron’s insistence that Britain would not accept migrants fleeing Libya for Europe.

Many are genuine asylum seekers fleeing war zones but thousands of others are would-be economic migrants.

Two weeks ago the Sunday Express revealed pressure had been put on Downing Street by Italy, France and Germany to accept up to 25,000 North African migrants, as the humanitarian crisis reaches epidemic proportions.

The new proposals will instead see Britain provide a Royal Fleet Auxiliary vessel, thought to be RFA Lyme Bay, to form the core of the blockade.

Part of its remit will be to destroy vessels used by people traffickers so that they cannot be used again.

The plans are expected to form part of talks at tomorrow’s Foreign Affairs Council meeting in Brussels, which is to be attended by Foreign Secretary Philip Hammond and Defence Secretary Michael Fallon, though they will need to be ratified at next month’s European Council meeting.

They follow David Cameron’s declaration last month that Britain would “be there to smash (people-trafficking) gangs and stabilise the region”.

Sources at the MoD said she would carry 200 Royal Marines, three Merlin helicopters and fast boats, which will be deployed to intercept migrant-carrying vessels.

New Offshore Raiding Craft assault boats fitted with armoured panels will be used to give Royal Marines a limited form of protection.

Last night Whitehall sources said the Prime Minister would want the legal support of a United Nations mandate before he commits any military resources.

A senior naval source said that planning was at a very early stage, with ships and personnel “warned for operations” pending a political decision in the next few weeks.

He added: “Currently, planning requires the capability to rescue migrants to be maintained, while delivering a second stand-alone function to stop the smugglers and their boats.

“This will mean rescuing the migrants and sinking their boats.

“But I would stress that at present we are only on standby, and there has not been a decision to sail.”

Last night former First Sea Lord, Admiral Lord West, said: “I have been arguing for this for many weeks.