More British troops are being sent to South Sudan, where they may face the task of ensuring humanitarian aid is not stolen 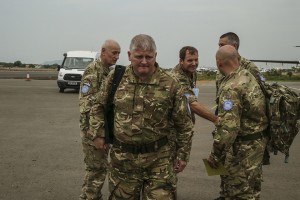 Britain’s aid minister has refused to rule out the use of UK troops to secure aid deliveries in South Sudan, where 400 soldiers are expected to be operating soon, like reported by sky.com.

Priti Patel, the Secretary of State for the Department for International Development, was repeatedly pressed by Sky News on whether the troops, who are expected to be fully deployed in South Sudan later this year, could be used to protect humanitarian aid from being looted by warring factions in the renewed civil war.

I asked her: “In the case of South Sudan, you’ve got 400 British troops going there. Could they not be used to ensure the safety and security of humanitarian supplies?”

She replied: “This is a combined effort so I think it’s important to say we are working together at every single level.

“The humanitarian piece is absolutely crucial, it really is, but also we are sending troops over in a very important role.

“I think it’s fair to acknowledge the role that they are going to be playing is a strategic role and it’s a very important one but the UK’s effort is a combined effort.”

Sky News pressed on: “Are we going to be seeing British troops making sure that Sudanese rebel groups or the Sudanese government troops don’t steal it?”

“We’ll be working together and that’s the point.”

But the peacekeepers have earned an appalling reputation for standing by during rape attacks by government troops on western aid workers in the capital Juba last year, and for failing to protect civilians who have been targeted in tribally-based violence that the UN has warned is close to genocide.

An extra 100 troops were tasked with going to South Sudan after the region collapsed into war. They will be required to protect aid workers, western embassies and the UN.

It is therefore conceivable that they may also be tasked with preventing the theft of aid to South Sudan where, during the 1990s civil war, armed groups stole 80% of all food and fuel that was sent as humanitarian supplies.

They used the aid to continue their war with the north, and with each other.

The latest round of conflict has pitted the government of president Salva Kiir, a member of the Dinka tribe, against his rival and vice president Riak Machar, who is from the Nuer ethnic group.

The Nuer have been targeted by the Dinka on a massive scale in fighting that has displaced 1.7 million people in the last two years and forced at least 400,000 people into exile in Uganda’s north.

Emergency humanitarian aid to conflict zones inevitably becomes part of the currency and trade that allows those conflicts to continue.

In Syria, where food aid is delivered to millions of displaced people, the deliveries have enriched members of the Syrian government, Syrian rebel groups, including al Qaeda, and Islamic State.

These groups control the trucking delivery of aid and the distribution which further enhances their earnings and allows for food to be used as a weapon or for political manipulation.

Mrs Patel admitted this was “complex” but she refused to rule out the funding of deliveries to conflict zones where there was doubt about the destination and control of supplies in disaster areas like South Sudan, Somalia and Syria.