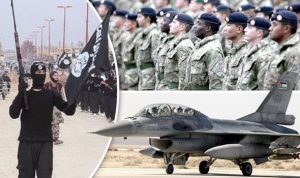 UK military trainers will be sent to Jordan to help the nation’s air force in the fight against Islamic State, the Prime Minister is to announce later during a visit to the Middle East, like reported by forces.net .

After the Westminster terror attack, Theresa May will say the threat posed by the jihadi group shows how allies must come together to face it down.

Arriving in Amman on Monday, she will set out a package of measures to bolster co-operation between British forces and the Royal Jordanian Air Force (RJAF) and to tackle violent extremism in the region.

Jordan has stepped up its air strikes against IS, also known as Daesh, in recent months and boosting military links with the nation will help keep Britain safe, the PM will say.

Training will be carried out in Jordan and the UK to help the RJAF improve its capability to strike IS targets.

During talks with King Abdullah a month after they met in Downing Street, the premier will also discuss support for the state as it deals with the fall-out from the conflict in neighbouring Syria, which has forced hundreds of thousands of refugees to flee over the border.

The Prime Minister is also heading to Saudi Arabia during the three-day trip, which will focus on strengthening trade and security ties as Britain prepares to quit the European Union.

Ahead of the visit, she said:

“As the United Kingdom leaves the EU, we are determined to forge a bold, confident future for ourselves in the world.

“We must look at the challenges that we, and future generations, will face and build stronger partnerships with countries that will be vital to both our security and our prosperity.

“It is clearly in the UK’s security and prosperity interests to support Jordan and Saudi Arabia in tackling regional challenges to create a more stable region, and in delivering their ambitious reform programmes to ensure their own stability.

“An even deeper partnership with these countries, and greater knowledge and understanding of one another, will increase our ability to address the issues that concern us, including the promotion of international standards and norms.

“To tackle the threats we face from terrorism and from geopolitical instability, we must meet them at their source.

“Jordan is on the frontline of multiple regional crises and I’m clear that by working with them, we are helping keep British people safe.

“Likewise in Saudi Arabia: we must never forget that intelligence we have received in the past from that country has saved potentially hundreds of lives in the UK.

“And there is so much we can do together on trade, with immense potential for Saudi investment to provide a boost to the British economy.

“So I hope my visit will herald a further intensification in relations between our countries and deepen true strategic partnerships, enabling us to seize the opportunities ahead and ensure the security and prosperity of our people for decades to come.”