You are here: Home / Africa / UK to intensify military activity in the Sahel region to combat jihadist insurgency 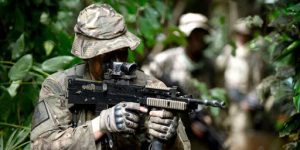 250 British soldiers are set to join a United Nations (UN) missions in Mali later this year.

The proposed deployment is in addition to the 30 British soldiers and Royal Marines currently deployed in Senegal.

The British forces in Senegal are seconded to a US-led so-called counter-terrorism exercise providing training to Special Forces from several West African nations.

Major John House, who is the commander of British forces in Senegal, has strongly backed the decision to send more troops to the region under the guise of counter-terrorism.

“If we don’t act we may find the problems getting closer to our door”, Major House told the BBC.

The additional British forces being sent to Mali may be part of a UN mission, but there appears to be implicit recognition by all key stakeholders that the British – in tandem with their American allies – will be operating independently of UN command.

As part of the deployment, British forces are expected to conduct long-range reconnaissance patrols into hostile territory.

Britain’s eagerness to be more deeply involved in the region, despite the risks, has inevitably given rise to suspicions that the real motive behind the deployment is more about influence projection than counter-terrorism.

This latest proposed deployment comes in the wake of the unprecedented dispatch of 30 Royal Marines to Belarus for training purposes.

In the light of these deployments, it would appear that Prime Minister, Boris Johnson, wants to flex his muscles before a long-anticipated defence and security review gets off the ground.