You are here: Home / Europe / UK to extend surveillance aircraft use in Iraq and Syria 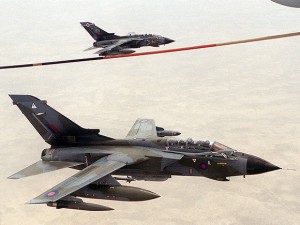 The UK is to extend the use of surveillance aircraft in Iraq and Syria until next year, the defence secretary has announced.

The announcement was made a year after MPs voted for military action in Iraq.

The UK has been carrying out out surveillance and air-to-air refuelling operations in Syria although the government was defeated in a vote on military action in the country in 2013.

The government has been carrying out air strikes in Iraq since 30 September 2014.

The Ministry of Defence (MoD) said Britain, working with coalition forces, had helped the Iraqi military regain 25% of territory that IS militants held after their advance last summer.

Iraqi forces have taken back 200 square kilometres in the north, recaptured Tikrit in the centre and pushed IS militants out of Diyala province in the east, the MoD said.

Mr Fallon said: “The fight against ISIL is our top operational priority and Britain is playing a vital role.

“Our armed forces have conducted more than 300 strikes, flown almost a third of all coalition surveillance flights and trained over 2,000 local troops…

“Now we must build on this progress. We will not let up until we have defeated this barbaric terrorist organisation.”

In July it emerged that UK personnel had taken part in bombing raids in Syria against IS militants while embedded with US and Canadian forces, despite the fact MPs had voted against UK military intervention.

It was also later revealed that two British IS jihadists were killed by an RAF drone strike in Syria, with Prime Minister David Cameron describing the attack as an “act of self defence”.

Chancellor George Osborne told the BBC’s Andrew Marr Show this month that ministers should once again make the case for military intervention in the country against IS militants.