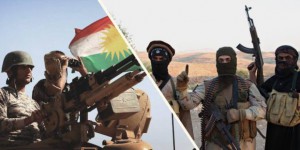 The UK Secretary of State for Defence Michael Fallon on Monday said in the House of Commons that the United Kingdom backs the Kurdish Peshmerga forces with heavy weapons to fight militants of the Islamic State (ISIS) in northern Iraq.

UK MP Jack Lopresti asked the Secretary of State why it took a year for the UK to supply ammunition and heavy weapons to the Peshmerga forces in Iraqi Kurdistan.

“Can he assure the House that such delays will never happen again, and that we are doing everything that we possibly can to help the Peshmerga in their fight against Daesh?” he asked, using another acronym for ISIS.

“I announced earlier in the summer a fresh gift from us of ammunition for those heavy machine guns, and that ammunition has now arrived and is being used,” he added.

Moreover, the UK Defence Secretary said the fight against ISIS is making progress in both Syria and Iraq.

“With coalition support, Iraqi forces have freed Fallujah and, as part of preparatory operations for retaking Mosul, have liberated Qayyarah town,” he said.

The UK minister further said that Russia is “not a partner” in the fight against ISIS.

“The Russian military activity in Syria has supported the Assad regime, a regime that bombs, tortures and starves its own people,” Fallon said.

“While we welcome the latest ceasefire from tonight, it is Russia that must make it work by stopping Assad attacking Syrian civilians and moderate opposition groups, and by helping to get humanitarian aid into Aleppo and other cities that have been starved of food,” he concluded.