You are here: Home / Europe / UK Spy Chief: terror attacks will happen in the UK 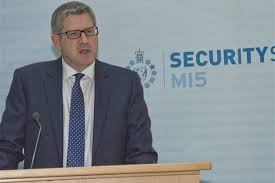 The U.K.’s chief of intelligence stated Tuesday that a terrorist attack is inevitable and that Russian aggression poses a serious threat to his country’s national security. He said the U.K. had uncovered and prevented 12 terror plots in the past three years and that attacks were at the highest rate he had seen in his 33-year service with the British Security Service.

Andrew Parker, director general of the service also known as MI5, made the remarks during a historic interview with The Guardian. It was the first time a newspaper was able to interview an incumbent chief of the 107-year-old intelligence bureau, whose heads’ identities were not even made public until 1993. Parker evaluated the risks that the U.K. faces both at home and abroad and came up with three primary areas of concern.

The first was Islamic extremism and terrorist attacks inspired by it. He praised the bureau as being crucial to building up a “good” defense for the country, but claimed this still fell short of being able to entirely protect against terrorism.

“My expectation is that we will find and stop most attempts at terrorism in this country,” Parker told the Guardian. “There will be terrorist attacks in this country. The threat level is severe and that means likely.”