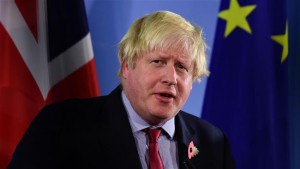 “It is a cruel irony that some of the intelligence we have, you may know, suggests that the gentleman in question has actually vacated the scene himself and is nonetheless using internet media to encourage people to take part in violence,” Johnson said in an address to Parliament on Friday.

He said Baghdadi may have fled Mosul using a series of underground tunnels that were uncovered by Iraqi forces, according to spy sources.

This is while, reports say the Daesh chief is now trapped in the city as a full-scale operation has been underway since last month to drive out Daesh terrorists from their last stronghold in Iraq.

The Iraqi army as well as various military groups in the country, including Shia, Sunni and Kurdish forces, managed to enter Mosul’s limits earlier this week for the first time since June 2014, when the city fell to Daesh. The forces are now closing in on the city from almost all directions.

On Thursday, the terrorist group released an audio message purportedly from their leader, al-Baghdadi, in which a man speaks confidently in Arabic about victory in Mosul and urges followers to continue fighting.

“Do not retreat,” ‘said the audio recording. “Holding your ground with honor is a thousand times easier than retreating in shame.”

Before taking control of the terrorist group, Baghdadi was once detained by US forces in the Iraqi town of Fallujah in the Anbar province on February 4, 2004, according to a Pentagon statement.

He was held until the following December at a prison at Camp Bucca, but a review board later recommended his “unconditional release,” according to the Pentagon.

He was first seen in public back in July 2014, when he was delivering a sermon at the Great Mosque of al-Nuri in Mosul.

The British foreign secretary further warned that Daesh will be “vindictive” as their defeat becomes inevitable.

“This is the toughest task that Iraq’s security forces have yet encountered, and success will take time,” Johnson said.

“The terrorists have threatened to inflict a scorched earth campaign once the loss of Mosul becomes inevitable,” he added.

Johnson also praised a so-called anti-terror campaign being conducted by British and US forces and some of their allies in Iraq and Syria as well as the presence of British forces in the region as “crucial to this effort.”

He said there are currently 500 British soldiers in Iraq, where they are helping to train the country’s armed forces.

The UK, along with the United States and some of their allies, has been conducting a so-called anti-terror campaign in Syria and neighboring Iraq for more than two years.

However, they have done little to stop the Takfiri terrorists; instead their air raids have killed many civilians, and caused extensive damage to the country’s infrastructure.