You are here: Home / Europe / UK should be prepared to send ground troops to Syria 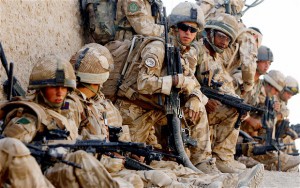 Britain should be prepared to deploy ground troops in Syria to defeat Isis, the Coalition government’s former foreign secretary has said.

William Hague wrote in the Daily Telegraph newspaper that while the UK was wrong to invade Iraq, it would not necessarily follow that it would be wrong to send troops to Syria.

“That [military deployment] should be Syrians, Iraqis or other Arabs, but it would be a mistake for Britain or other western nations to rule out some of our own forces operating there if that can make the crucial difference to the outcome,” he argued.

“The contrasting lessons of [the Rwandan genocide, where the international community didn’t intervene] and Iraq should show all of us that there is no simple, binary choice about being pro- or anti-intervention overseas.”

Mr Hague’s call echoes comments by former head of the army Lord Dannatt, who said that Syria would require “effective combat troops” on the ground – though he did not explicitly name the UK.

The Government wants Britain to join airstrikes against Isis in Syria, which are currently been carried out by the United States, France, and other nations.

Labour’s deputy leader Tom Watson has said he believes air strikes along would not be enough to defeat Isis but that there was no appetite for deploying ground troops in the country.

The opposition party is however split on how to approach the Syrian crisis. Its leader Jeremy Corbyn has said Britain should focus on brokering a deal involving regional powers such as Iran.

Some MPs from the party’s interventionist wing are expected to vote against their leader and support British airstrikes, however.

It is not currently clear whether Mr Corbyn will give MPs a free vote on action in Syria. He has previously said he had no plans to do so.

The UK is already taking part on airstrikes against Isis in Iraq. In 2013 the Government was defeated by a coalition of Labour and rebel  Tory MPs on a plan to attack Assad regime forces in Syria.

Polls suggest the public broadly supports airstrikes in Syria if done as part of a multinational force in accordance with international law.