You are here: Home / Europe / UK says it would accept transitional Government in Syria 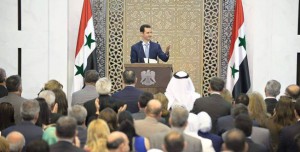 Foreign Secretary Philip Hammond said Britain would be prepared to accept Bashar al-Assad staying in power in Syria for “a short transition” period under international supervision.

Hammond said the UK was “pragmatic” about the process of transition, but categorically opposed demands for elections that would determine whether Assad could remain as president.

“I am not saying that on day one Assad and his cronies have to go,” he told Parliament’s Foreign Affairs Committee on 9 September. “What I am not prepared to discuss is what I understand to be the Russian and Iranian position that we need to move to elections in Syria. We cannot work with Assad in anything other than the very short term of a transition.”

Syria has been locked in conflict since 2011 with an array of forces trying to overthrow Assad. The war has become the Middle East’s biggest humanitarian and economic disaster of the past 25 years, displacing at least 10 million people and facilitating the rise of the Islamic State militant group, which now controls a huge swath of territory in Syria and Iraq.

Russia has been pushing for a wider campaign against Islamic State that would include Assad, something the US and Europe have opposed. Iran has also vowed to back the Assad regime.

The pressure to find solutions to the Syria crisis has intensified as European countries struggle with the influx of hundreds of thousands of refugees from the country. Prime Minister David Cameron on 8 September said Britain would accept as many as 20,000 Syrian asylum-seekers over the next five years.

British diplomatic efforts are focusing on “persuading Russia and Iran that their equities can be protected, that the future stability of Syria could be best assured by allowing a transition that did not seek to dismantle the entire regime but did remove Assad and the group around him that are manifestly responsible for the bloodshed that’s been committed,” Hammond said.