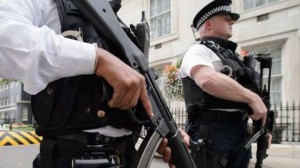 British officials say the number of people being arrested on suspicion of terrorism-related crimes has reached a record high as police and security services cope with the influence of Islamic State militants based in Syria.

The Home Office figures released Thursday show 299 people were arrested in the 12 months that ended in March. Officials say that represents a 31 percent increase over the previous 12 months, and is the highest figure since records started being kept after the September 11, 2001, attacks in the United States.

Officials also report a “marked increase” in the number of suspects who are either British or dual nationals.

The number of women arrested also increased substantially to 35, officials say. That represents a threefold increase over five years.

Police have warned that the Islamic State group has been adept at winning youthful followers inside Britain via social media. The group has sought to appeal to young women and teens, encouraging them to travel to Syria to join the group and marry jihadis.