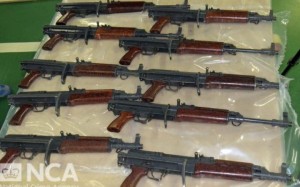 More than 800 deadly firearms have been taken off the streets following a major operation by anti-terror police and officers from the National Crime Agency, like reported by telegraph.co.uk .

During a month long operation to prevent terrorists and criminals getting their hands on illegal guns, officers also arrested almost 300 suspects.

Among the weapons seized were 200 handguns, two machine guns, one sub-machine gun, 11 assault rifles, as well as 4,385 rounds of ammunition.

Some of the weapons were seized from registered firearms dealers who had had their licenses revoked, while others are thought to have been smuggled into the UK from the continent.

Last year the Metropolitan Police began offering cash rewards to informants who told them where illegal weapons were located in order to tackle a worrying rise in the number of shootings across the capital.

While many of the incidents were thought to be gun related, senior officers have expressed concern that terrorists could obtain weapons from criminal gangs and could then unleash a Paris or Brussels style attack.

The latest operation, which saw officers from the NCA and National Counter Terrorism Policing unit, working in conjunction, trialled a new approach to intelligence collection and sharing.

Detective Superintendent Nick Wilcox of National Counter Terrorism Policing said: “Counter terrorism officers continue to plan and prepare in light of world events such as the attacks in Paris – but we want to remain on the front-foot and stop terrorists obtaining guns in the first place.

“Low firearms availability is a major advantage in the UK. In many other western countries someone like Muhiddin Mire, the man who attacked innocent passers-by in Leytonstone tube station last year with a knife, could probably have got hold of a firearm and one serious injury could have become tens of deaths.

“Communities defeat terrorism – our collective safety depends on everyone’s efforts and we need your help to prevent a marauding firearms attack.”

NCA Deputy Director Chris McKeogh, who led the operation, added: “The surge of activity across the whole of the UK has yielded significant results – from the seizure of illegally held firearms and ammunition, to the number of reports we received from members of the public via Crimestoppers.

“Collectively, we will build on what we achieved in this short period of time to ensure that we develop the best intelligence we can about the firearms crossover between organised crime and terrorism.

“Gaining the confidence of the public to come forward with information about illegal firearms is key to any campaign and I would like to thank all those who had the courage to speak up. As a direct result of your call or report, we are able to protect the public and reduce the risk posed by those with access to illegal firearms. This is not over though. One gun in the wrong hands is too many, so please think hard and if you know something, pick up the phone anonymously”.