You are here: Home / Senza categoria / UK: Majority support for cooperating with Russia and Assad on Syria 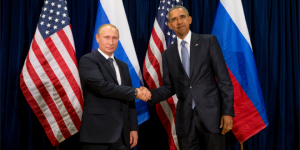 Russia began bombing opponents of president Assad in Syria yesterday, giving the US only an hour’s warning. Russian defence officials said the attacks on rebel-controlled areas were targeted at ISIS militants, however US officials said there was no evidence ISIS held the territory – there are now concerns Russia is targeting all forces opposed to president Assad, possibly even US-backed Syrian forces. The news came two days after Vladimir Putin met with Barack Obama about the need to work with Assad in Syria, an alliance the US has ruled out repeatedly.

David Cameron said this week he would “work with anybody” to defeat Assad and ISIS, including Russia and Iran. New YouGov research reveals the majority of British people (59%) would approve of British and US forces cooperating with Russia to fight ISIS.

Opinion also balances slightly in favour of cooperating with Assad to fight ISIS (38% would approve, 32% would disapprove). Many people are unsure (30%).

Russia is opposed to ground troop operations and Britain’s history in Iraq has made the suggestion unpopular in the past, but as Iraq destabilises and loses ground to ISIS British opposition to ground troops is fading away.

Now more people support Britain and the USA sending ground troops back into Iraq to help fight ISIS (40%) than oppose (39%). In July, when YouGov last asked, people were divided 39%-39%, but before then opposition was clear.

British support for RAF air strikes in Syria, which is to be debated in the Commons soon but may struggle to pass without the support of Jeremy Corbyn’s Labour, remains strong. 60% support and 20% oppose.

The prime minister regrets being defeated in parliament in 2013 over air strikes in Syria brought on by Assad’s use of chemical weapons and barrel bombs in 2013. Many now believe that intervention then, before rebel forces became fractured and infiltrated by ISIS and al-Qaeda militants, could have abated the current conflict, even easing the current refugee crisis largely brought on by people fleeing Assad’s regime.