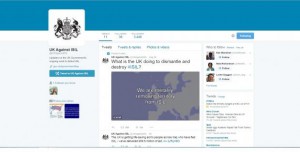 The United Kingdom launched a Twitter account to provide the public with information regarding their work to defeat the Islamic State group.

The account, @UKAgainstISIL, opened by asking the rhetorical question: “What is the UK doing to dismantle and destroy ISIL?” using an alternative acronym for IS.

The accompanying 30-second video listed a number of actions the UK has done to combat the Syria and Iraq based organisation. They included “removing territory from ISIL”, “cutting of ISIL financing”, and “reducing the number of fighters travelling to join ISIL”.

What is the UK doing to dismantle and destroy #ISIL? pic.twitter.com/1dCpbI2BBU

The UK has taken part in the US-led international coalition that is bombing IS in Iraq – its pilots have also been controversially involved in striking IS in Syria, despite a parliamentary vote in 2013 that blocked military intervention in the war-torn country.

London views IS as posing a direct threat to the UK’s national security. This has led to David Cameron’s government trying to stop IS fighters from returning to the UK – Friday’s video on Twitter said the government had “stopped people wanting to do harm from reaching the UK”.

The video also revealed that 203 people have been arrested for “Syria-related terror offences”.