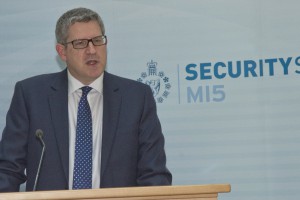 Britain’s head of domestic intelligence has warned that the level of terrorist plotting against Britain is at its highest level in more than three decades.

Andrew Parker on Thursday used a BBC Radio interview to call for new powers to monitor communications to track terror plots. He said the proliferation of new Internet technologies poses a difficult challenge. It was the first live broadcast interview given by any British intelligence chief.

Parker says “they are using secure apps and Internet communication to try to broadcast their message and incite and direct terrorism amongst people who live here who are prepared to listen.”

Parker said British police and security services had intervened to foil six terrorist plots in the last 12 months, more than at any point in his 32-year career.