You are here: Home / Europe / UK could send 1,000 troops to international force in Libya 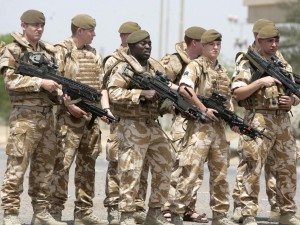 Britain could be set to deploy 1,000 troops as part of a 6,000-strong international force in Libya, the House of Commons Foreign Affairs Committee said Tuesday.

The committee said in a letter to Foreign Secretary Philip Hammond that it had heard on a visit to Egypt and Tunisia this month that “the UK plans to contribute 1,000 ground troops to a 6,000-strong international force which will be deployed to Libya in the near future”.

Western countries have agreed that military action is needed to dislodge the Islamic State group from Libya, but world powers have said they want a national unity government installed to request help before formally intervening.

On Saturday, a unity government in Libya announced it was taking office despite lacking parliamentary approval.

The force would aim to train the Libyan army and protect the newly-formed government in Libya, the committee added in the letter, urging Hammond to make a statement on the issue.

Libya descended into chaos after the 2011 ouster of longtime dictator Moamer Kadhafi, allowing extremist organisations including IS to gain significant ground.

The committee’s letter added that Britain’s Defence Secretary Michael Fallon was expected to agree Britain’s contribution to the force at a conference in Europe this week.