You are here: Home / Europe / UK and France to increase efforts to return illegal migrants to Africa 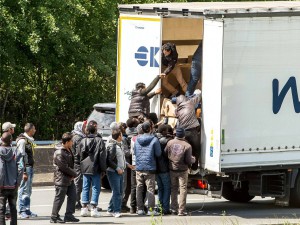 France and Britain agreed to step up efforts to discourage migrants from Africa and the Middle East from coming to Europe, and said they were considering returning them to their home countries.

British Home Secretary Theresa May met her French counterpart Bernard Cazeneuve in Paris as chaos on both sides of the Channel has run for a week due to a French ferry workers strike in Calais and Coquelles.

3,000 migrants camping around the northern French port of Calais this week sought to take advantage of traffic jams caused by the ferry workers’ strike to steal into stationary trucks.

Calais is one of the front lines in a wider immigration crisis in which European countries are struggling to agree among themselves how to deal with growing numbers of migrants fleeing conflict or poverty.

May said both France and Britain wanted to discourage migrants to make the journey from the Mediterranean into Europe and considered returning the migrants to their home countries.

“With the impact of the strike, we see people in Kent also facing problems in traffic and so forth as a result of that, but the way to deal with the issue of the migrants coming through to Calais is actually to break the link between the journey from North Africa over the Mediterranean and settlement in Europ,” May said after her meeting with Cazeneuve.

“We are very clear that’s what needs to be done and what we have agreed today is a further working with the French government to work together to ensure we can return people from Europe into Africa so that people see that, actually, that journey does not lead to settlement in Europe.

“People are putting their lives in the hands of organised criminals, or criminal gangs. They are paying the money, they are making dangerous journeys to come to Europe. We must ensure that they don’t try to make that journey which is a dangerous one, and that they see that this journey will not lead to settlement in Europe.”

Both ministers said in a written statement that extra resources would allow new measures aimed at preventing migrants from gaining access to Calais port premises from the beach, and to secure the Channel Tunnel.

Striking ferry workers blocking access to Calais port in northern France agreed on Wednesday to let some boats through, partly lifting a blockade in its third day.

They agreed to let some boats go after their representatives were invited to meet with Transport Ministry officials on Thursday morning, following a threat to disrupt traffic through the Channel Tunnel for 48 hours.

“What we have been doing today is continuing a very good, constructive collaboration that the UK and French governments have had in dealing with issues around Calais, particularly issues with migrants in Calais but also obviously the strike that has taken place in relation to MyFerryLink has exacerbated that situation.

“The French have increased the number of police that they have at Calais dealing with these issues but what we have been discussing today is how we can improve, together improve the security of Calais and of Coquelles to ensure, and I am very clear, we need the smooth running of the port and obviously the smooth running through the Tunnel,” May added.

May said that cooperation had increased and that working together was the only way to secure the ports on both sides of the Channel.

“What we have seen is that the French have put extra police into these ports to ensure that they can deal with situations that have been developing and we have also seen both not just border forces identifying people who have been trying to get through to the UK on these lorries, we have also seen the French police also apprehending and stopping people, clandestines from getting into these lorries. Working together is what is important and what we have been discussing today is how together we can improve the security of these two ports,” she said.

Last week, crowds of migrants tried to stow away on queuing lorries after disruption by striking French ferry workers halted traffic through the Channel Tunnel linking Britain and France.

Cameron said the British government was looking at reinforcing its border controls with France at Calais after what he said were “unacceptable” scenes.