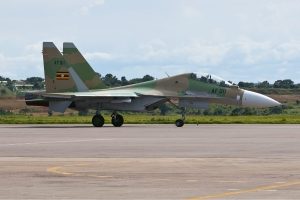 The Uganda People’s Defence Air Force has for the first time sent a contingent of ace pilots to support the ongoing African Union (AU) peace operations in Somalia, like reported by newvision.co.ug.

The air force will provide aerial escort for convoys, reconnaissance operations along the supply routes, medical evacuation, air search and rescue as well as aerial combat against the al-Shabaab in Mogadishu.

The contingent of airmen and women and helicopters was flagged off yesterday by the chief of defence forces Gen. Aronda Nyakairima and the commander of the air force Gen. Jim Owoyesigire. Aronda handed over the AU flag to the contingent commander Lt. Col. Chris Kaija.

Gen. Owoyesigire said that the utility helicopters will be used to support the ground troops in line with the unapproved mandate for troops deployed in Somalia under the African Mission in Somalia (AMISOM).

The Ugandan air force is to provide air cover in the areas of Somalia which are occupied by the contingents from Burundi, Djibouti and Uganda, according to Gen. Aronda.

Gen. Aronda said that the Uganda air force has formally joined AMISOM after the deployment was authorised by President Yoweri  Museveni and endorsed by the African Union and the UN.

Addressing the air force personnel, Gen. Aronda said, “We have won battles in Somalia but we are yet to win the war. I have no doubt that you have been prepared and you are ready to go and support AMISOM. Go and support the ground forces which have done credible work.”

Aronda said that the deployment of the air force is coming at a time when Somalis are going for parliamentary and presidential elections this month.

According to Gen. Aronda, with Mogadishu now pacified, the ground troops presently have to move long distances in the rest of the country and need rapid response which can be provided by the air force.