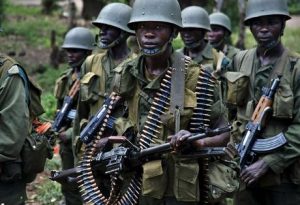 Uganda and Democratic Republic of Congo launched joint air and artillery strikes in eastern Congo on Tuesday against an Islamic State-allied militia known as the Allied Democratic Forces (ADF), both countries said according to reuters.com.

Ugandan army spokeswoman Flavia Byekwaso said she was yet to have details of the attacks but they would not be a one-off.

“As announced, the targeted and concerted actions with the Ugandan army started today with airstrikes and artillery fire from Uganda on the positions of ADF terrorists in the DRC,” Congo government spokesman Patrick Muyaya said on Twitter.

Islamic State said their local affiliate was behind a Nov. 16 attack that killed seven people, including the three bombers, and injured dozens more.

A local chief and a resident said they heard explosions on Tuesday morning in Watalinga territory, North Kivu province, in the borderlands of eastern Congo.

“There is a real panic here at home, especially because we were not informed of this situation,” said resident Julien Ngandayabo. “We have suffered too much with the ADF, who have massacred our families. We are waiting to see if this is the solution.”

Pascal Saambili, head of the Watalinga chiefdom, said the community woke up to the sound of heavy bombardment which continued during the morning.

On Monday, the Democratic Republic of Congo haddenied agreeing to joint operations with Uganda to track down the ADF, insisting they were only sharing intelligence.

The Nov. 16 attack was the third Islamic State has claimed in Uganda. It also claimed responsibility for an attack at a pork restaurant in a suburb of Kampala on October 23 that killed a waitress, while another attack on Oct. 8 killed no one.