You are here: Home / Mediterranean / UAE sets up military base in east Libya 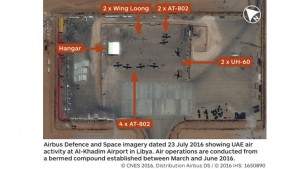 The United Arab Emirates has established a military base in east Libya to back Khalifa Haftar’s Army in its ongoing war in Benghazi,  IHS Jane has reported.

The UK-based defence and security consultancy said the airbase is operating AT-802 light attack aircraft and unmanned aerial vehicles (UAVs), according to obtained Airbus Defence and Space satellite imagery.

It was established in Al-Khadim Airport, 70 km to the south of Al-Marj town where Khalifa Haftar’s command is located.

IHS pointed out that there was little infrastructure at Al-Khadim at the beginning of this year. Three months later, new buildings were built and work on a new aircraft parking area (ramp) could be seen in the satellite imagery..

“By 27 June hangars were under construction next to the new ramp, which had not been paved at that time. An operational area had been set up on the existing ramp where two Air Tractor aircraft, two UH-60 Black Hawk helicopters, two Il-76 transport aircraft, one Il-18 turboprop airliner, and two UAVs were present.” IHS explained.

The number of Air Tractors at Al-Khadim had increased to six on 23 July, when two Black Hawks, two UAVs, and a single Il-76 could also be seen.

The UAE is fuelling the conflict in the country by sending arms and ammunition to Dignity Operation to fight rivals in Benghazi in east Libya.