You are here: Home / MidEastGulf / UAE sent troops to Yemen island for drill 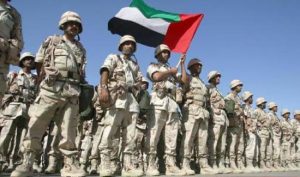 The United Arab Emirates says it sent military recruits for training on a Yemeni island where its troops have been stationed, according to ap.org.

UAE forces and aid organizations have been on Socotra Island, which sits near the mouth of the Gulf of Aden, since a deadly cyclone struck in November 2015. It represents a crucial chokepoint and has seen recent attacks from Somali pirates.

Emirati forces have military outposts in several areas in Yemen as part of an ongoing Saudi-led war there.

The UAE, while hosting some 5,000 American troops, increasingly is flexing its own military muscle in the region by opening bases abroad.