You are here: Home / MidEastGulf / UAE leads the way in fight against Al Qaida in the Arabian Peninsula 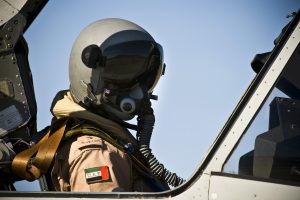 Since the ouster of late Yemeni president Ali Abdullah Saleh, and especially since the start of the Saudi-led coalition’s intervention in Yemen to uphold the legitimacy of the country’s internationally recognised government, Al Qaida in the Arabian Peninsula, AQAP, has tried to take advantage of the security vacuum in some areas of Yemen, a UAE newspaper said in an editorial on Tuesday, like reported by wam.ae.

“AQAP, widely recognised as the global terrorist group’s most active branch, has carried out a series of attacks against civilian and military targets in Yemen, despite itself suffering debilitating losses as a result of hundreds of US drone strikes,” said Gulf News.

The paper added, “Of late, the biggest gains against the terrorist group on the ground have been made as a result of ground operations by elite UAE-trained Yemeni forces, with air support from the coalition, especially the UAE Air Force.

“In the most recent development on the ground, hundreds of UAE-backed Yemeni troops have pushed into a long and rugged valley west of Al Mukalla city, the capital of the Hadramaut province, which has long been a sanctuary for Al Qaida militants. Training and support from the UAE have allowed special Yemeni army units, such as the Hadhrami Elite Forces, to gain control of the entrance points, besiege the militants, and advance by clearing booby traps and landmines, and by warding off ambushes. The current offensive, codenamed Al Faisal Operation, is being carried out across three main axes in the area, backed by an intense aerial bombing campaign.”

It further added, “The UAE’s approach to security in Yemen, and the region in general, is marked by a clear identification of the threats. On the one hand, there is the danger posed by extremist terrorism of the kind propagated by groups such as AQAP and Daesh; on the other, the expansionist policies of regional powers such as Iran through armed proxies, like Al Houthis, to spread instability and sow sectarian discord.

“In April 2016, the UAE launched a large-scale operation against AQAP and other terrorist organisations, which resulted in significantly reducing acts of terror committed in various Yemeni governorates. It enabled authorities on the ground to restore essential infrastructure services, illustrated by the reopening of Port Mukalla in the Hadramaut governorate, which is a lifeline for economic activity in Yemen.”

“The essence of UAE’s efforts is also that the success of any anti-terror and anti-militia ground operation is followed by a full-blown humanitarian response, spearheaded by agencies such as the Emirates Red Crescent, thereby ensuring the UAE always wins the battle for hearts and minds,” concluded the Dubai-based daily.