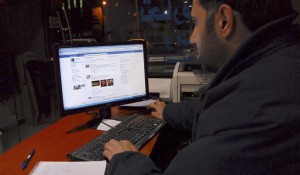 From afar, it looks like any gathering of old friends engaged in a time-honored ritual, sipping coffee while the hours slip by in one of this North African city’s many cafes.

But something more serious is going on. The young people around the table are actually participants in a program discreetly backed by the U.S. Embassy to spur serious discussions here on such topics as how groups like the Islamic State exploit social media — and what can be done to stop it.

The program is called “Cafe Talk,” and it may well be the tip of the spear in the Obama administration’s much touted attempt to make so-called “Countering Violent Extremism” (CVE) initiatives more central to the world’s long-term fight against the terror group also known as ISIS and ISIL.

The politics of CVE are heated in Washington, where Republicans accuse the administration of lacking focus and obsessing too broadly on “extremism,” while refusing to use words like Islamic terrorism. But at ground level in countries like Tunisia — the top source country for Islamic State recruits — the American partisan battle feels less compelling.

Many young people here are so angry about Islamic State’s appeal to their countrymen that they’re desperate for partners to help find an alternative to the Tunisian government’s current approach of simply jailing anyone suspected of harboring extremist views.

“No local authorities in Tunisia — really, no authorities here — listen to young people,” said Aslam Souli, a bright-eyed 23-year-old medical student, so appalled by Islamic State that he and some friends have formed a group called the Tunisian Youth National Initiative Against Terrorism.

Cafe Talk, managed by another youth-oriented nonprofit called the International Institute of Debate, has given Mr. Souli’s group a platform. “The goal is to work on preventing the spread of extremism among youth,” he told The Washington Times. “We have to understand what makes young people go to jihad. We aim to listen to young people. You can earn their trust.”

The need for such nonofficial civil society action to counter Islamic State across the Arab world cannot be overstated. “ISIS recruitment is like a cancer spreading inside Tunisia,” said Mohamed Iqbal Ben Rejeb, 40, the president of a charity group here that tries to help families with children who have left to fight with terror groups in Libya, Syria and Iraq.

Mr. Ben Rejeb, who formed the Rescue Association of Tunisians Trapped Abroad after his own handicapped brother was briefly lured to Syria in 2013, said the government’s posture toward his and other NGOs has been anything but positive.

The government is hamstrung by security fears, he said in quiet tones over coffee, revealing his own fear of being under surveillance. While a government security crackdown has had some success since late-2014, Mr. Ben Rejeb said, it won’t permanently end Islamic State’s appeal without deeper engagement to address the root causes of the problem.

Some in the government appear to agree. “Our biggest challenge is the counternarrative,” said Karim Ammar, who heads the government’s counterterrorism Fusion Center. “It’s a good idea to show youth that ISIS’ read of the Quran is not the real meaning of the Quran, that ISIS is actually at war with Islam.”

Mr. Ammar said he’s a big supporter of the Obama administration’s CVE initiatives. But he also said Tunisian authorities aren’t about to ease off surveillance presently being conducting against more than 1,000 suspected jihadis in the nation.

“The Tunisian government officially is supporting all CVE initiatives, but the government doesn’t have the experts on CVE,” said Mr. Souli. “It’s the first time that the country is dealing with the issue, so the first solution for the government was to fight terrorism with security.”

As for his own organization, the 23-year-old said, “We’re perceived by both sides, government officials and terrorists, like bad guys. Nobody likes us, because we talk about something that is disturbing for everyone.”

But is it working? U.S. officials admit it’s hard to gauge the extent to which programs like Cafe Talk are having an impact.

“When it comes to our CVE efforts, it’s not a lack of resources that’s the challenge, it’s figuring out what works,” said one senior U.S. official, who spoke on condition of anonymity.

The official pointed to a host of similar programs underway in Tunisia. The U.S. Embassy is promoting national Boy and Girl Scouts chapters here. It’s also backing a graffiti campaign known as “Heroes Build” — financing Tunisian artists to produce drawings of their heroes with an eye toward guiding youth culture away from jihadi influences.

To get backing for a Cafe Talk, meanwhile, organizers must agree to take notes and file a report — including suggestions for solving whatever problem is discussed — to be posted at cafetalks.org. Sometimes young people just want to talk about how hard life can be in Tunisia, where the economy has struggled since a 2011 revolution replaced dictatorship with still-uncertain democracy.

“Young people complain about poverty, the lack of development in their region, about basic needs not being satisfied, no transportation or work with salary,” said Mr. Souli. “Some of the major complaints are about how nobody listens to them and there is no place to have fun. So when you’re trying to figure out why did they get radicalized, those are some major reasons for it.”

Young people need to feel empowered, Mr. Souli said, recalling a Cafe Talk that resulted in a lot of complaining about a polluted river in northern Tunisia.

“The solution that was arrived at was for the young people to film and take pictures of people who were throwing garbage in the river,” he said. “They put the videos on Facebook and the photos on houses of the people who threw the garbage, so it was like a shaming campaign. If you go now to that area, you’ll find it one of the cleanest in Tunisia without needing to have the government to even get involved.”