You are here: Home / MidEastGulf / U.S. to send more troops to Syria to combat Islamic State 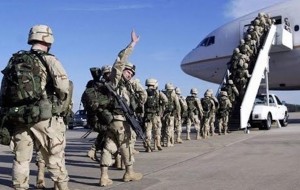 He added the troops would assist in an effort to bring “the full weight of U.S. forces around the theater of operations, like the funnel of a giant tornado,” onto the so-called Islamic State capitol, according to the Wall Street Journal.

“By combining our capabilities with those of our local partners, we’ve been squeezing ISIL by applying simultaneous pressure from all sides and across domains, through a series of deliberate actions to continue to build momentum,” Carter said, referring to the militant organization also known as ISIS and Daesh.

The U.S. plans to divide the Islamic State’s territory in Syria and Iraq, including its stronghold in Mosul, while also targeting the group’s leadership.

“Leaders of the terrorist group can no longer travel between Raqqa and Mosul without the risk of either being struck from the air or hunted down by the coalition’s Expeditionary Targeting Force,” Carter said. “In fact, since we began accelerating our campaign last year, we’ve killed the majority of ISIL’s most senior leaders.”