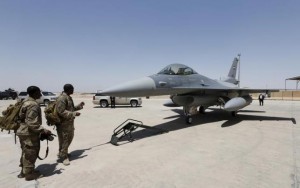 The United States will send more troops to Iraq, potentially putting them closer to the frontlines to advise Iraqi forces in the war against Islamic State militants.

U.S. Defense Secretary Ash Carter made the announcement on Monday during a visit to Baghdad during which he met U.S. commanders, Iraqi Prime Minister Haider al-Abadi, and Iraqi Defence Minister Khaled al-Obeidi.

About 200 additional troops will be deployed, raising the number of U.S. troops in Iraq to about 4,100, a senior U.S. Defense official said.

The Pentagon will also provide up to $415 million (291 million pound) to Kurdish peshmerga military units.

Carter did not meet Kurdish leaders in person during his visit, but spoke with the president of the Kurdish region, Massoud Barzani, on the telephone.

Monday’s announcement is the move in the past several months by the United States to step up its campaign against the hardline Sunni Islamist group. U.S. special forces are also deployed in Iraq and Syria as part of the campaign.

Iraqi forces – trained by the U.S. military and backed by air strikes from a U.S.-led coalition – have since December managed to take back territory from Islamic State, which seized swathes of Iraqi and Syrian territory in 2014.

The new U.S. troops will consist of advisers, trainers, aviation support crew, and security forces. Most of the new military advisers are expected to be army special forces, as is the case with the approximately 100 advisers now in Iraq.

The advisers will be allowed to accompany smaller Iraqi units of about 2,500 troops that are closer to the frontlines of battle, whereas now they are limited to larger divisions of about 10,000 troops located further from the battlefield.

That will allow the U.S. military to offer quicker and more nimble advice to Iraqi troops as they try to retake Mosul, the largest Iraqi city still under Islamic State control.

But by placing them closer to the conflict, it could leave them more vulnerable to enemy mortars and artillery.

The United States has also authorized the use of Apache attack helicopters to support Iraqi forces in retaking Mosul, Carter said. The United States had originally offered the Apaches to the Iraqi government in December. The Iraqis did not take up the offer then but did not rule out their use.

The United States will also deploy an additional long-range rocket artillery unit to support Iraqi ground forces in the battle for Mosul, Carter said. There are two such batteries already in place in Iraq.