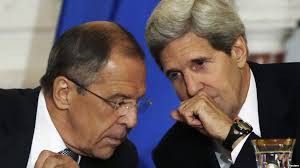 The Obama administration plans to accept an offer from Russia for direct talks on its military buildup in Syria that U.S. officials believe is aimed at propping up Syrian President Bashar Assad, the Associated Press reports.

Seeking answers to myriad questions about the precise reasoning behind Moscow’s recent deliveries of material and manpower to a base in northern Syria, U.S. officials said they expect the administration to begin a military-to-military dialogue with Russia in the coming days. The Pentagon will take the lead in the discussions but the exact level, venue and timing have yet to be determined, officials said.

White House spokesman Josh Earnest, without commenting on specific consultations, said the Obama administration “would welcome constructive Russian support for the efforts of the anti-ISIL (Islamic State extremists) coalition in Iraq and in Syria.”

Kerry said Lavrov had told him that Russia was only interested in confronting the threat posed by the Islamic State group in Syria. He added that if Russia is only focused on the Islamic State group, then it remains a potential partner in pushing for a political transition in Syria. “If Russia is only focused only on ISIL and if there is a capacity for cooperation … there still is a way to get a political negotiation and outcome,” the secretary said.