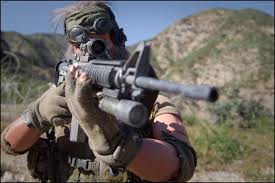 American Special Forces have captured a ‘significant’ ISIS operative in northern Iraq as part of a new mission to increase pressure on the terror group.

U.S. forces will interrogate the suspect, who sources declined to name, before turning them over to Iraqi or Kurdish authorities, CNN and the New York Times reported.

The operative is the first target to be captured by a 200-strong team led by the elite Delta Force troop, which is known as the ‘expeditionary targeting force’, since deploying in Iraq in recent weeks.

Although US commandos have captured ISIS members in Iraq before, the 200-member Special Operations team is the first major American combat force on the ground there since the United States pulled out of the country at the end of 2011, reports the New York Times.

It is believed that the team arrived in the region a number of weeks ago and has been establishing intelligence networks and gathering information on targets ahead of this raid, though it is not known exactly when the operation took place.

The hope is that the new detainee will provide information on the location of other ISIS figures, allowing for more hostages to be taken in the coming weeks and months.

The detainee is being held in a temporary structure in the northern Iraqi town of Erbil, where the American unit is based and which is currently held by Kurdish Peshmerga forces.

Defense Department officials have notified the International Committee of the Red Cross, which monitors the treatment of detainees, though a spokesman for the organization declined to comment.

Obama officials have ruled out transporting the detainee to an American detention facility, including Guantanamo Bay, as the President seeks to close the jail before his term in office ends.

It is not known how long American forces plan to hold the detainee, though sources said the interrogation could take weeks or even months.

Defense Secretary Ash Carter announced that a force was being deployed to Iraq and Syria in December last year amid criticism that the Obama administration was not doing enough to thwart ISIS in the wake of the Paris attacks in which 130 people were killed.

At the time, he said: ‘We’re deploying a specialized expeditionary targeting force to assist Iraqi and Kurdish Peshmerga forces and to put even more pressure on ISIL.

‘These special operators will over time be able to conduct raids, free hostages, gather intelligence and capture ISIL leaders.’

The force is the first significant deployment of American troops inside Iraq since combat units pulled out at the end of 2011.

Special Operations troops killed ISIS leader Abu Sayyaf during a raid in eastern Syria back in May last year and captured his wife, Umm Sayyaf.

Information gleaned from her, as well as data taken from computers, files and hard drives used by ISIS, convinced Carter of the need to put a permanent force together.

Sayyaf is still being held by the Kurdistan Regional Government an was charged last month with being part of a conspiracy resulting in the death of Kayla Mueller, 26, an American aid worker.

Mueller had been captured by ISIS in 2013 and was kept as a sex slave by the Sayyafs and repeatedly raped by ISIS’ self-proclaimed emir, Abu Bakr al-Baghdadi, while in his custody.

Then, in November last year, U.S. special forces were recorded taking part in a raid to free prisoners held by ISIS at a compound in Hawija, northern Iraq.

It was during that raid that Special Forces Master Sergeant Joshua Wheeler, 39, was shot dead, becoming the first America casualty in the war against ISIS.