You are here: Home / Mediterranean / U.S. Special Envoy to Libya: Islamic State may be expanding outside stronghold 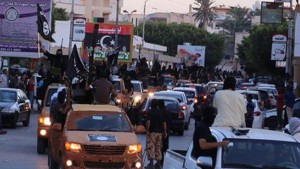 The Islamic State (ISIS/ISIL) only controls a “sliver of territory” in its Libyan stronghold, but the terrorist group may be “forming cells” elsewhere in the African country, warns the U.S. special envoy for Libya.

ISIL has been dramatically weakened through its extensive losses in Sirte and Benghazi, and further losses in Sabratha, Derna, and elsewhere in Libya.

Many hundreds of terrorists have died in these battles. But most of those who have not been killed probably have stayed in Libya and gone underground, forming cells elsewhere in the country. We believe they are waiting for opportunities to engage in further attacks in Libya or its neighbors, and if possible to reassert ISIL geographically.

Sirte, a coastal city in Libya located only a few hundred miles across the Mediterranean Sea from the shores of Europe, was once considered ISIS’s largest stronghold outside of Iraq and Syria.

In his written testimony to the House Foreign Affairs Subcommittees on North Africa and Terrorism, the envoy also notes:

A year ago… ISIL was expanding, capturing 90 miles of Mediterranean coastline around the coast city of Sirte – a stone’s-throw away from Europe’s southern shores.

A year later, the picture looks very different. Now, due to the bravery of GNA-aligned Libyan fighters, supported since this summer by the skill of U.S. forces who have conducted more than 450 airstrikes, coordinated with our Libyan partners, ISIL controls just a few city blocks in Sirte. And its grasp on even this sliver of territory is tenuous. ISIL and other terrorist groups in other parts of Libya have also been pushed back.

The GNA refers to the United Nations-backed Government of National Accord, a Prime Minister Fayez al-Sarraj-led unity government formed after the signing of a Political Agreement in December 2015.

In April, Reuters explained, “the Presidential Council and the Government of National Accord (GNA) emerged from a deal mediated by the United Nations and signed in December to overcome an impasse that saw rival governments in Tripoli and Bayda competing for power.”

Winer points out that the GNA has been “a steadfast partner of the United States and the international community against ISIL.”

The special envoy also acknowledges that the war against ISIS in Libya is far from over.

“The gains against ISIL are real,” testifies Winer. “But they also could be reversible, if Libyans do not come together to participate in the Government of National Accord and to help it perform its work for the Libyan people and to unify against the common threat to all.”

According to Winer, Libya still remains a fertile ground for ISIS.

“Political divisions among Libyans let ISIL in the first time. And unfortunately, Libyans still remain divided,” declares Winer, later adding, “The security of Libya and the region and our own national security interests depend on it.”

“The potential for renewed fighting among Libyans remains a very real concern,” he warns. “To turn their attention to the fight against their common enemy, ISIL, we believe it essential that Libyans choose to make the national reconciliation they envisioned in the Political Agreement a reality.”

In early September, the Pentagon indicated that ISIS’s grip over its Libyan stronghold Sirte had been reduced to three neighborhoods.

That assessment came nearly four months after the U.S. military estimated that the number of ISIS fighters in Libya had nearly doubled to between 4,000 and 6,000.

Libya was plunged into chaos following the U.S.-backed removal and execution of Libyan dictator Muammar Gaddafi who reigned over the North African country for 42 years.

Jihadist groups such as ISIS filled a power and security vacuum left by the dissolution of the Gaddafi government.

President Barack Obama has requested $148 million in foreign assistance to Libya for fiscal year 2017 “to provide the United States government with the flexibility necessary to respond quickly to Libya’s stabilization requirements in places like Sirte given the rapid progress GNA aligned forces have made to eradicate ISIL from the city and surrounding areas,” explains Winer.

U.S. financial aid to Libya will continue to support “efforts to counter ISIL in key strongholds and vulnerable areas while also targeting the group’s ability to recruit foreign fighters, obtain financing, and spread its message globally,” he adds.