You are here: Home / MidEastGulf / U.S. sends warning to Iran by striking Houthis 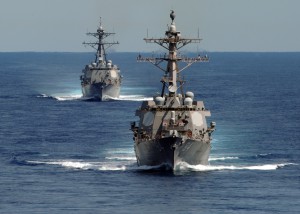 The latest military developments in Yemen have taken a new path after the U.S. navy hit Houthi radars along the Yemeni coast.

Washington asserted on Thursday its readiness to launch new strikes against Houthi rebels in Yemen if they keep attacking U.S. ships facing the country’s shores.

Through its threat, Washington was also indirectly warning Iran, which provides Yemen’s insurgents with weapons.

Speaking during a press conference in Washington, Pentagon spokesperson Peter Cook said the U.S. forces knock out three positions, the U.S. thinks had played a role in launching the missiles against USS Mason on Sunday and Wednesday.

“The U.S. will respond to any further threat to our ships and commercial traffic, as appropriate,” Cook said.

Earlier, the Pentagon had said that the USS Mason ship had launched a number of missiles at three military positions, controlled by Houthis along the Red Sea shores.

The Pentagon added that the U.S. missiles, authorized by President Barack Obama, hit radar sites in the city of Mukha in the Taiz province, and in Khoka and Ras Isa in the Hudaydah province.

The Pentagon spokesperson said Iran was playing a role in the Yemeni crisis by helping Houthi rebels.

In an earlier warning to Tehran, Pentagon spokesman Captain Jeff Davis said that the U.S. Department of Defense would make sure that anybody who interferes with freedom of navigation or anybody who puts US Navy ships at risk “does so at their own peril.”

Davis added: “It’s no secret that Iran has been actively supplying them and giving them the tools of war.”

Yemeni observers told Asharq Al-Awsat that Iran had provided the rebels with modern missiles capable to hit naval ships in the Yemeni ports.

During a meeting with U.S. Ambassador to Yemen Matthew Tueller, al-Ahmar said: “This terrorist attack reveals the size of the plot that Houthis aim to serve, and which includes threatening neighboring countries and the international community.”

He said that threatening international fleets is an unacceptable violation that will be faced by the Arab Coalition.

Yemeni observers said that the attack on the U.S. navy aims to push Washington into the ongoing war between Houthis and the National Army, which is supported by the Arab Coalition.

The observers said that by shoving the U.S. into the war, Houthis plan to assert their claims that Washington was involved in the Yemeni war.