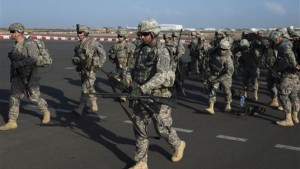 Niger is in the middle of a desert corridor between Mali’s lawless north and Libya’s barren south used by Islamist militants, including some with ties to al Qaeda.

State television said that U.S. ambassador Eunice Reddick had visited the troops earlier on Friday at the base in Agadez, a gateway city to the desert north.

“Training began in mid-October in Agadez with more than 30 American instructors who will train more than 100 of our soldiers,” said a Niger military source.

The mission is the latest sign of closer military cooperation between the two countries following the donation of two U.S. military aircraft in late October.

Direct military operations are limited mostly to short raids although each year the United States organises an annual training session for regional troops, including Niger soldiers.