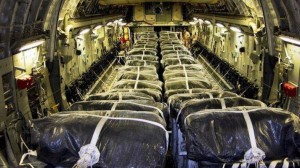 The U.S. military has completed its second delivery of ammunition to the newly formed Syrian Arab Coalition, a sign of the strengthening relationship between the U.S. and a group of Arab forces that coordinates with Kurdish fighters battling Islamic State in Syria.

U.S. officials confirmed Sunday that the delivery to Syria had been completed sometime Saturday. Officials wouldn’t characterize what was provided, except to say it was a big delivery.

“There was a whole lot of ammunition,” an official said.

The U.S., France and their allies are scrambling to respond to a series of attacks in Paris on Friday that left more than 125 dead. The delivery had been scheduled before the attacks, officials said.

This is the second delivery of ammunition since the U.S. became partners with the Syrian Arab Coalition, an umbrella group of about 5,000 Arab forces that is battling alongside Kurdish fighters, all of whom are aligned against Islamic State in Syria.

The Pentagon is taking a cautious approach to the coalition, providing the group with ammunition for one operation before assessing how well it performed before sending more.

One senior defense official described the approach as: “drop, op and assess,” meaning ammo was dropped, an operation was undertaken and an assessment of that operation was completed.

The first delivery, consisting mostly of small arms ammunition, was conducted by air on Oct. 11. The arrival of the second batch of ammunition, this time by land, suggests the coalition is performing well enough against Islamic State that the U.S. is willing to continue the relationship.

Although the coalition is comprised mostly of Arab groups, many work in conjunction with Kurdish forces, known to be some of the most effective fighters against Islamic State.

Defense Secretary Ash Carter and others have championed helping Kurdish fighters because of their battlefield effectiveness, despite concerns in Turkey that such a move would embolden Kurdish separatists.

Pentagon officials have sidestepped questions about whether the ammunition deliveries amount to arming the Kurds, saying instead that the ammunition is going to the groups for which it is intended.