You are here: Home / MidEastGulf / U.S. sees Assad staying in Syria until at least March 2017: AP 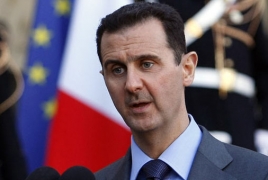 The Obama administration’s best-case scenario for political transition in Syria does not foresee Bashar al-Assad stepping down as the country’s leader before March 2017, outlasting Barack Obama’s presidency by at least two months, the Associated Press reports citing a document it has obtained.

An internal timeline prepared for U.S. officials dealing with the Syria crisis sets an unspecified date in March 2017 for Assad to “relinquish” his position as president and for his “inner circle” to depart. That would be more than five years after Obama first called for Assad to leave.

The timeline is based on a broad UN-endorsed plan that was initially laid out at an international conference in Vienna in November. Syria, according to that strategy, would hold elections for a new president and parliament in August 2017 — some 19 months from now. In the interim, Syria would be run by a transitional governing body.

Countless hurdles lie ahead for implementation of this latest blueprint for ending five years of conflict that has killed more than a quarter-million people, created the worst European refugee crisis since World War II and allowed the Islamic State group to carve out a would-be caliphate across parts of Iraq and Syria.