You are here: Home / MidEastGulf / U.S sailor dies after shooting in Bahrain 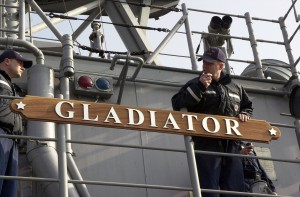 The U.S. Navy says a sailor assigned to an anti-mine ship operating in the Persian Gulf has died after a shooting in Bahrain.

The Navy said in a statement Monday that the sailor was pronounced dead at around 5:20 a.m. Sunday. The Navy did not disclose how the shooting occurred but described it as “non-hostile fire.”

The sailor was assigned to the Avenger-class mine countermeasures ship USS Gladiator, which was in port in Bahrain when the shooting happened. The tiny Gulf island nation hosts the Navy’s 5th Fleet.

An investigation has been launched. U.S. 5th Fleet spokesman Cmdr. Kevin Stephens says there are no indications of foul play.

Bahraini officials had no information about the shooting.