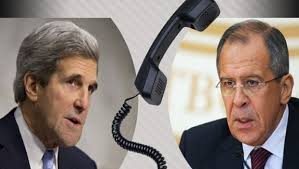 U.S. Secretary of State John Kerry spoke by telephone on Tuesday with his Russian counterpart, Foreign Minister Sergei Lavrov, and the conflict in Syria was on Kerry’s agenda for the discussions, the U.S. State Department said.

State Department spokesman John Kirby did not immediately offer details of the call between Kerry and Lavrov. U.S. officials have indicated that Russia is increasing its military presence in Syria and have expressed concern about whether Moscow is boosting support for Syrian President Bashar al-Assad.