You are here: Home / Africa / U.S. pledges $60 million for antiterrorism force in Africa 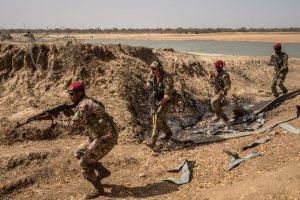 The United States pledged $60 million to a new United Nations-backed antiterrorism force from five African countries including Niger, where four American soldiers were killed early this month, like reported by nytimes.com.

The pledge, announced by Secretary of State Rex W. Tillerson in Washington and Ambassador Nikki R. Haley at the United Nations, came as the United Nations Security Council was meeting about the vast and lawless Sahel region in western and north-central Africa, where the force will operate.

“Defeating terrorism depends on making sure terrorist organizations cannot have safe havens on any continent,” Mr. Tillerson said in a statement announcing the pledge, which will require congressional approval.

“This is a fight we must win, and these funds will play a key role in achieving that mission,” he said.

The 5,000-member force of soldiers and police officers, with recruits from Burkina Faso, Chad, Mali, Mauritania and Niger, was created by those countries in February to combat the growing threat of extremist groups, drug smugglers and human traffickers in the Sahel.

With little government control, the region is regarded as a fertile haven for Al Qaeda, the Islamic State and their offshoots.

The Security Council unanimously endorsed the force in June but questions of how its $500 million annual cost will be financed have not been resolved. The European Union, which has committed about $58 million to the force, will convene a donor conference in December.

The United States, the biggest single financial contributor to United Nations peacekeeping operations, has been seeking to cut their costs and had resisted proposals to commit peacekeeping resources to the five-nation Sahel force.

But the $60 million pledge suggested the American position may be evolving. It was announced less than four weeks after four American soldiers, including Special Forces members, were killed during a joint patrol with counterparts from Niger near the Mali border.

Ms. Haley said in her remarks about the Sahel force at the Security Council that “we understand the force will need ongoing support and are eager for opportunities to work with our partners to make this effort a successful one.”

The American pledge was welcomed by France, which has taken the lead in Western backing for the Sahel force. France has strong post-colonial ties to all five of the African countries that contributed.

Foreign Minister Jean-Yves Le Drian of France, who led the Security Council meeting on Monday, told reporters afterward that he was “delighted by the statement of American support” and that it was “unquestionably an important development.”

It remains unclear exactly how the force will coordinate actions with the United Nations Multidimensional Integrated Stabilization Mission in Mali, known as Minusma, one of the biggest and most dangerous peacekeeping operations in Africa with more than 14,000 personnel. Minusma peacekeepers have been attacked frequently by militants.

Mr. Le Drian said he was confident that “we will be able to refine the coordination between Minusma and the Joint Force, which is by its very nature a multilateral force.”