You are here: Home / MidEastGulf / U.S. offers millions in rewards for information on ISIS leaders 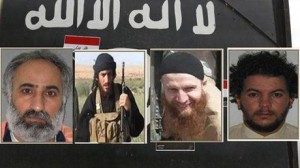 The State Department announced multimillion-dollar rewards on Tuesday for information leading to the whereabouts of four Islamic State leaders.

The department’s Rewards for Justice program is offering up to $7 million for information on Abd al-Rahman Mustafa al-Qaduli, up to $5 million each for Abu Mohammed al-Adnani and Tarkhan Tayumurazovich Batirashvili, and up to $3 million for Tariq Bin-al-Tahar Bin al Falih al-’Awni al-Harzi.

According to the department, Mr. Qaduli is a senior Islamic State official who originally joined the Qaeda affiliate in Iraq, Mr. Adnani is an official Islamic State spokesman, Mr. Batirashvili is a battlefield commander in northern Syria, and Mr. Harzi is the group’s leader for the region along the Syria-Turkey border. A $10 million reward had already been offered for the group’s top leader, Abu Bakr al-Baghdadi.