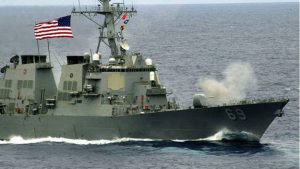 The U.S. Navy says a guided-missile destroyer fired a flare toward an Iranian Revolutionary Guard vessel in a tense encounter in the Persian Gulf, like reported by usatoday.com.

He says the Iranian boat came within 1,000 meters (yards) of the USS Mahan.

The lieutenant says the Mahan “made several attempts to contact the Iranian vessel by bridge-to-bridge radio, issuing warning messages and twice sounding the internationally recognized danger signal of five short blasts with the ship’s whistle, as well as deploying a flare to determine the Iranian vessel’s intentions.”

The Iranian vessel later sailed away.

Iranian authorities did not immediately report the incident on Wednesday.

The U.S. Navy and Iran routinely have tense encounters in the waters of the Persian Gulf.