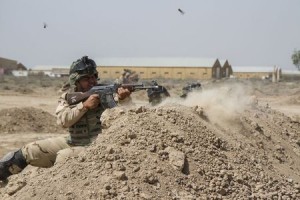 The United States is considering replicating the creation of a new U.S. military hub in Anbar elsewhere in Iraq as the campaign against Islamic State advances, the top U.S. military officer said on Thursday.

“It’s another one of the options that we’re considering,” General Martin Dempsey, chairman of the Joint Chiefs of Staff, told a small group of reporters before landing in Naples, Italy, acknowledging that might require more troops.

Dempsey said examination of such a possibility was “just part of prudent planning.”

His comments came a day after President Barack Obama ordered the deployment of 450 additional U.S. troops to Iraq as the United States establishes a hub in the Sunni heartland to advise and assist Iraqi forces seeking to retake territory lost to Islamic State.

The hub will be located at the Taqaddum military base, which is only about 15 miles (25 km) from Ramadi, the capital of Anbar province, which fell to Islamic State militants last month.

Dempsey described the Taqaddum base as a “lily pad” for the U.S. military to expand farther in Iraq to help encourage and enable Iraqi forces to battle the Islamic State. He said planning for other such sites was not just at the theoretical level.

Dempsey did not see another such site in Anbar province anytime soon.

“But I could conceive of one potentially somewhere in the corridor that runs from Baghdad to Tikrit to Kirkuk and over into Mosul. So we’re looking at that area,” Dempsey said.

The plan to expand the 3,100-strong U.S. contingent in Iraq and open a new operations centre closer to the fighting in Anbar province marks an adjustment in strategy for Obama, who has faced mounting pressure to do more to blunt the momentum of the insurgents.

But with Obama sticking to his refusal to send troops into combat or to the front lines, the White House announcement failed to silence critics who say the limited U.S. military role in the conflict is not enough to turn the tide of battle.

Dempsey, who has long warned about the limits of U.S. military power in Iraq, expressed confidence that the latest deployments to Taqaddum would help advance Iraq’s military campaign against Islamic State.

But the real test was whether Iraq could mend a sectarian rift, something that was up to the country’s political leaders.

“When people say: ‘Is this a game changer? This new partner capacity site? No.’ It’s an extension of an existing campaign that makes the campaign more credible,” Dempsey said.

“The game changers are going to have to come from the Iraqi government themselves.”