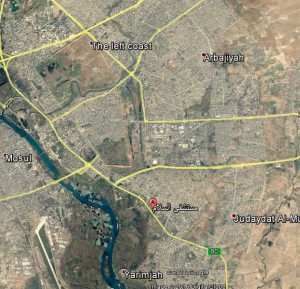 The U.S.-led international coalition fighting against the Islamic State said it bombed a hospital in Mosul to support Iraqi forces battling on the ground.

The coalition said Iraqi security forces on Tuesday were attempting to seize Mosul’s al-Salem hospital complex from the Islamic State in the city’s east, which is currently the goal of capture by government forces.

The Islamic State, also known as ISIS, Daesh, and ISIL, was using the hospital as a base of operations, and a command and control headquarters, the coalition said.

The Iraqi forces were able to capture the area, but on Wednesday faced several counter-attacks and six car bombings. Iraqi forces would then retreat “a short distance, under heavy enemy fire, to strengthen their position.”

“After Iraqi forces continued to receive heavy and sustained machine gun and rocket propelled grenade fire from ISIL fighters in a building on the hospital complex, they requested immediate support from the coalition,” Operation Inherent Resolve said in a statement. “In support of the Iraqi security forces, coalition aircraft conducted a precision strike on the location to target enemy fighters firing on Iraqi forces.”

Col. John Dorrian, U.S. spokesman for Operation Inherent Resolve, told Rudaw the coalition is “not exactly sure” if there were civilian casualties.

“We saw no civilians observed in the area, we are not exactly sure,” Dorrian said. “But we did not observe any civilians in the area and we conducted the strike in the interest of protecting the Iraqi Security forces from firing that Daesh was doing from that building.”

The coalition said it complies with the international laws of armed conflict, adding that it “takes all feasible precautions during the planning and execution of airstrikes to reduce the risk of harm to non-combatants.”

Iraqi security forces, aided by the Kurdish Peshmerga, Shiite militias and a U.S.-led international coalition, began a ground offensive on Oct. 17 to capture Mosul away from the control of the Islamic State, also known as Daesh, ISIS and ISIL.

“We will continue to strike ISIL military targets in support of our partners in order to defeat ISIL in Iraq,” the coalition said.