You are here: Home / MidEastGulf / U.S. launches manned airstrikes against ISIS from Turkey 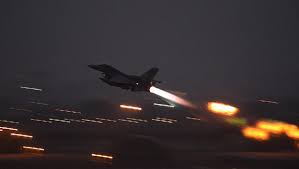 The U.S. on Wednesday launched its first airstrikes by Turkey-based F-16 fighter jets against Islamic State targets in Syria, marking a limited escalation of a yearlong air campaign that critics have called excessively cautious.

In a brief statement the Pentagon announced the F-16 strikes were launched from Incirlik air base in southern Turkey but provided no details on the number or types of targets struck.

A U.S. defense official said later that two of the six F-16s based at Incirlik flew the mission over Syria to hit one or more targets that had been selected in advance. The official spoke on condition of anonymity to discuss details of the mission.

Earlier this month the U.S. began flying armed drones from Incirlik, but the F-16 flights add a new dimension to the air campaign, in part because of the added risk to pilots who might encounter Syrian or other air defenses.

Pentagon officials have said the main advantage of using Incirlik is its proximity to Islamic State targets in northern Syria, although a senior U.S. defense official said Wednesday that the F-16s may also be used on missions over Iraq. The official was not authorized to discuss F-16 mission details publicly and spoke on condition of anonymity.

Most U.S. aerial combat missions over Iraq and Syria are being flown from more distant air bases in Qatar and elsewhere in the Persian Gulf region, although the U.S. also is flying F-16s from Muwaffaq Salti air base in Jordan.

The official said the Incirlik-based F-16s are equipped with surveillance and reconnaissance equipment in addition to weapons, and thus can be used to verify targeting information that may be provided by local Syrians or Iraqis cooperating with the U.S. A total of six F-16s are operating from Incirlik; they are from the 31st Fighter Wing based at Aviano, Italy.

With the threat of Syrian air defenses in mind, the U.S. military is considering how to reconfigure its network of combat search-and-rescue forces in the region, the senior defense official said. The official indicated those forces are deemed sufficient for the moment but might change. Other officials have said the U.S. also is considering placing refueling aircraft at Incirlik in support of the F-16 mission.

After months of negotiations between Washington and Ankara, the Turkish government agreed in late July to permit the U.S. to station aircraft at Incirlik in southern Turkey.

A Foreign Ministry official in Ankara said Wednesday that Turkey has not carried out its own airstrikes against the Islamic State recently because the U.S. asked it to wait so that the two countries can coordinate efforts. The official asked not to be named because of the sensitivity of the issue.

The senior U.S. defense official in Washington said the two governments are working on a memorandum of understanding that would set the terms under which Turkish warplanes would be integrated into the U.S.-led air campaign.

Christopher Harmer, a senior naval analyst at the Institute for the Study of War and a retired Navy commander, said the deployment of six F-16s to Turkey provides only a marginal improvement to U.S. air operations against the Islamic State, in part by shortening the flying distance to targets in northern Syria.

More broadly, the escalation is important for bringing Turkey more directly in the conflict, Harmer said.

“Turkey is coming off the sideline,” Harmer said. “More than anybody else in the region, Turkey did not want to tangle with ISIS,” he added, using an alternative acronym for the Islamic State group. “All that nastiness that ISIS can do could be turned against Turkey in very short order.”

The Turkish situation is especially touchy in political terms, in part because Turkey is a NATO ally with a different perspective on the Islamic State problem. Whereas the U.S. is focused on fighting the Islamic State militants and has partnered with Syrian Kurds to that end, Turkey’s main priority is curtailing growing Kurdish power along its southern border with Syria.

The Turks worry that Kurdish gains in Iraq and in Syria will encourage a revival of a Kurdish armed insurgency in Turkey in pursuit of an independent state. The PKK, a Kurdish terror group, killed two Turkish police officers and the Turks have retaliated, bombing their positions. Other Kurdish fighters have been effective against the Islamic State.

“For a long, long time Turkey has struggled mightily to stay out of this fight because they are so vulnerable,” Harmer said.

An early indication of Turkish concern about the chaos in Syria was its request in 2012 for NATO missile defense support. Since early 2013 a number of NATO countries have operated Patriot missile defenses in southern Turkey, including a U.S. Army Patriot unit based at Gaziantep, due north of the Syrian city of Aleppo.