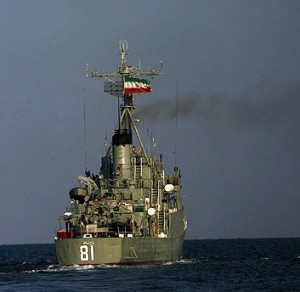 Iran has sent two warships to accompany an Iranian cargo boat delivering humanitarian aid to Yemen, and the United States has sent warships to shadow the Iranians.

Those were the intriguing developments May 19 as the Iranian ships neared the Yemeni port of Hodaida, where Iran has insisted they will unload their cargo.

But the United States and its allies, including Saudi Arabia, which is waging an air war against Iran-backed Huthi rebels in Yemen, are wary of Iran’s intentions and are following the Iranian flotilla “every step of the way,” said Pentagon spokesman Colonel Steve Warren.

Warren said he fears Iran is “planning some sort of stunt,” but “we’re not overly concerned at this point.”

Four other U.S. warships also are positioned to respond if needed in the western Gulf of Aden.

The U.S. has asked Iran to deliver the aid on the cargo ship, named the Iran Shahed, to a UN inspection station in nearby Djibouti, which is distributing relief to Yemen. Iran refuses.

Saudi Arabia and its Gulf allies are searching all ships trying to enter Yemen in a bid to prevent weapons being smuggled to the rebels, who control much of the country, including Hodaida.

Iranian officials deny they are arming the Huthis, but insist they will not let Saudi-led forces inspect the cargo ship.

Iran’s ploy has created a dilemma for the United States, which wants to avoid a confrontation with Iran over a ship that it believes is indeed delivering benign cargo.

But the United States also does not want Iran to set the “dangerous precedent” of winning free passage into Yemen without an inspection, lest it try to start delivering weapons that way, NBC’s sources said.

Meanwhile, Iran allowed international observers onto the cargo ship for what the U.S. officials called “propaganda purposes” to document any attempt to board and search, only to find no weapons on board.

One of the observers, Christoph Horstel, a German political activist who previously worked for Germany’s TV ARD, told Reuters: “It is a purely humanitarian mission. There is no ship accompanying us – let alone any Iranian warships.”

Horstel said that he saw an unidentified plane circle the ship three times May 18, however. He said the ship is due to arrive in Yemen May 20.