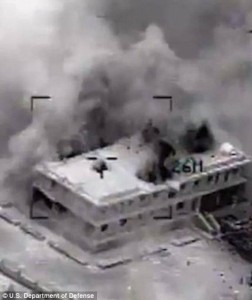 A series of deadly U.S. military strikes have killed prominent members of Syrian rebel militant groups, sparking outrage from the Syrian opposition, even though some of those killed were affiliated with al-Qaeda’s operations in Syria, like reported by vocativ.com .

The Pentagon announced last Thursday that U.S airstrikes have killed at least 20 al-Qaeda operatives in Idlib province, the main stronghold of Jabhat Fath al-Sham (JFS) in northwestern Syria. “We are confident these strikes will degrade al-Qaeda’s ability to direct operations in Syria,” Pentagon Press Secretary Peter Cook said in a statement. “Al-Qaeda remains committed to carrying out terrorist attacks against the United States and the West,” he said. U.S. forces would continue, he said, to “take action to deny any terrorist safe haven in Syria.”

Last week JFS confirmed that Younes Shoeyb and his 15-year-old son had been killed in a U.S drone airstrike. According to Charles Lister, a senior fellow at the Middle East Institute, Shoeyb had been a senior leader for an al-Qaeda group in Aleppo and a close aide of JFS leader Abu Mohammed al-Jolani. Other recent U.S. airstrikes in Syria killed an al-Qaeda militant who’d reportedly previously fought in Afghanistan and Yemen before moving to Syria, according to The Long War Journal.

Prominent users associated with the Syrian opposition criticized the attacks, calling the coalition the “criminal international coalition” for its targeting of the militant group, and called upon rebels to merge to liberate Syria. “We waited for America to support our revolution, and JFS is for sure the strongest faction (of the Syrian opposition). This is the result of waiting, and this is what happens to those waiting to ally with America,: remarked one member of a Facebook page for a group in Aleppo.

Others claimed the coalition wants to split the armed opposition and isolate al-Qaeda affiliated groups, calling the attacks “a clear American betrayal.”

According to a Washington Post report last November, President Obama ordered the Pentagon to find and kill JFS leaders that the administration had ignored in the past. The new direction reflected concern that the group was building al-Qaeda’s presence in Syria, as it was one of the most effective forces countering Syrian President Bashar al-Assad. This is unlikely to change once President-elect Donald Trump is inaugurated next week. Trump told The Wall Street Journal after his election win that his focus is on fighting ISIS rather than trying to remove Assad from power.