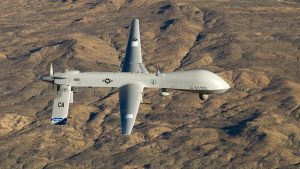 A U.S. drone strike killed several Pakistani Taliban militants in North Waziristan close to the Afghanistan border, one militant commander and intelligence sources said on Thursday, in a rare strike on Pakistani soil.

If confirmed, the air strike, which happened on Wednesday, would only be the second drone attack inside the nuclear-armed nation since U.S. President Donald Trump took office in January.

Malik Waheedullah, a local tribal leader, told Reuters he saw two missiles strike a mountain home which caught fire. “I drove away as fast as I could,” he said.

One Pakistani intelligence official and government source said they believed the strike to be a U.S. drone attack.

U.S. officials did not immediately respond to requests for comment.

North Waziristan was a Taliban stronghold until 2014, when Pakistan’s military launched a major offensive against the group and pushed many of its fighters across the border into Afghanistan.

Sources from the TTP identified one of the dead militants as Abdur Rahman, a senior commander of the Pakistani Taliban.

U.S. drone attacks inside Pakistan have become rare over the past few years. In its last high-profile attack inside Pakistan, the United States last May killed Afghan Taliban leader Mullah Akhtar Mansour in the southwestern province of Baluchistan.