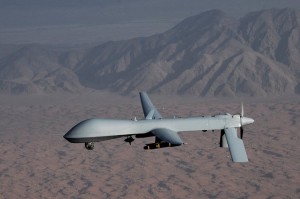 Early in 2012, worried that suicide bombers might pass through airline security undetected, American counterterrorism officials ordered a drone strike in Yemen to kill a doctor they believed was working with Al Qaeda to surgically implant explosives in operatives, according to British intelligence documents.

The documents, previously undisclosed, include details about how terrorism suspects are targeted in drone strikes and how strikes can go wrong at times. The documents also show how closely the National Security Agency has worked in Pakistan and Yemen with its British counterpart, Government Communications Headquarters, or G.C.H.Q.

Britain has carried out drone strikes only in war zones in Afghanistan, Iraq and Libya. The documents raise the possibility that in addition, British intelligence may have helped guide American strikes outside conventional war zones.

Drone strikes carried out by the C.I.A. and the military’s Joint Special Operations Command have received fresh scrutiny after President Obama disclosed in April that a strike had killed two Western aid workers held hostage by Al Qaeda in Pakistan. In that case, intelligence officers targeting the Qaeda compound had no idea the hostages were there, illustrating how incomplete or faulty information has led to civilian deaths in the drone campaign.

Last week offered two more examples of the uncertain outcomes of airstrikes. A prominent Algerian terrorist, widely reported dead in a Pentagon strike by F-15s, appears to still be alive. And only several days after a strike in Yemen did American officials learn that an attack had killed the leader of Al Qaeda in the Arabian Peninsula, who was also the No. 2 leader of Al Qaeda’s global terror network.

The British documents were provided by Edward J. Snowden, the former N.S.A. contractor, to The Guardian, the British newspaper and global website, and shared with The New York Times. Press officers for the N.S.A. and the C.I.A. declined to comment. G.C.H.Q. said in a statement that while it would not comment on intelligence operations, “We expect all states concerned to act in accordance with international law and take all feasible precautions to avoid civilian casualties when conducting any form of military or counterterrorist operations.”

An internal newsletter for the British agency identifies the doctor killed in a drone strike in Yemen on March 30, 2012, as Khadim Usamah, whom it describes as “the doctor who pioneered using surgically planted explosives.” The newsletter calls Dr. Usamah, who appears to have never been identified publicly before, a member of Al Qaeda in the Arabian Peninsula, the branch of the terrorist organization based in Yemen. It says he was killed along with a second Qaeda member.

The strike came at a time of especially intense concern inside the Obama administration about the persistent efforts of Al Qaeda in Yemen to use commercial aircraft to mount an attack on the United States. The chief bomb maker of the Arab peninsula branch, Ibrahim al-Asiri, was experimenting with designing explosives that a suicide attacker could carry undetected through conventional security checkpoints.

In August 2009, Mr. Asiri dispatched his younger brother, Abdullah al-Asiri, to Saudi Arabia with a bomb that by most accounts was inserted in his rectum. He detonated the explosives when he met with the Saudi counterterrorism chief, Mohammed bin Nayef, but the bomb killed only the younger Mr. Asiri.

On Dec. 25, 2009, a young Nigerian equipped by Mr. Asiri with explosives hidden in his underwear, Umar Farouk Abdulmutallab, made it through airline security and onto a flight from Amsterdam to Detroit. But when he tried to blow up the flight as it approached Detroit, the bomb only ignited and burned Mr. Abdulmutallab, who was swiftly subdued by other passengers.

Some intelligence officials expressed concern after that failed attack that Mr. Asiri had recruited one or more surgeons to experiment with implanting a bomb with no metal parts into the abdomen of a suicide bomber. There is no known case in which such an attack was carried out, but the British documents suggest that intelligence officials believed Dr. Usamah was part of an effort to develop such plans when he was killed.

Some of the British agency’s documents suggest, though they do not explicitly state, that it provided intelligence for that strike in Yemen and other American strikes. That would be no surprise, since intelligence cooperation between the United States and Britain has long been close, particularly in the area of signals intelligence, or eavesdropping. The documents discuss the British agency’s employees who work at an N.S.A. station in Fort Gordon, Ga., and at a large N.S.A. center in England called Menwith Hill Station.

British officials rarely speak publicly about cooperation with the program of targeted killings. In a formal answer to a parliamentary inquiry last year about whether Britain was participating in unmanned aerial vehicle strikes in Yemen, the British defense minister, Mark Francois, replied in writing that “U.A.V. strikes against terrorist targets in Yemen are a matter for the Yemeni and U.S. governments.” The answer did not explicitly deny a British role, but certainly suggested there was not one.

American drone strikes are supported by a majority of the public in the United States but opposed by the British public. A poll last year by the Pew Research Center found that 52 percent of Americans backed the strikes, with 41 percent opposed. In Britain, 59 percent were opposed, while 33 percent approved of the strikes.

Opposition to the strikes is often based on reports of civilians killed unintentionally. While proponents argue that missiles fired from unmanned aircraft are the most precise way to eliminate terrorists, intelligence agencies often do not have enough detailed information about who is in a strike zone to be certain that all are militants posing a threat to the United States or to Americans overseas.

The British agency’s documents underscore the central role of eavesdropping and the tracking of electronic signals in identifying suspects and in determining their exact location. Such sophisticated technology may improve the odds of finding and hitting the intended target.

But the British documents also hint at the flawed conclusions that signals intelligence can produce.

For example, a smartphone carried by a target can be easily tracked by the N.S.A. or its British counterpart, and can contribute to what the agencies call “PID,” or positive identification. But phones can, of course, be passed from person to person, leading to mistaken identifications.

“Of significant note,” the British agency’s October 2010 guide to targeting says with careful understatement, “is whether the handset is identified as single user or multi-user.” The guide has a reference to the International Security Assistance Force in Afghanistan, indicating that it was written to assist in strikes there.

With such uncertainties in mind, agencies try to identify targets by both voice and physical appearance, the document says. It also describes attempts to determine a suspect’s “B.D.L.,” or bed-down location.

Some suspects are more “Comsec aware” than others, the guide says — in other words, some of them pay more attention to communications security, aware that counterterrorism agencies may be tracking their calls.

The guide talks about a suspect “detaching” from communications — for example, ending a call or turning off a mobile phone — and notes the obvious: that someone who is talking on the phone will “detach” when hit by a missile.

“Immediately after a strike it should be possible to detect whether the target detached at time of strike,” the guide notes. “This is a good indication that the correct target has been struck.”