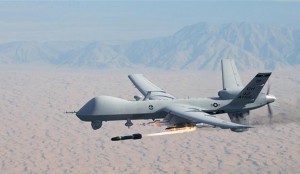 Two members of the Yemen-based al-Qaida branch were killed in a U.S. drone strike in Yemen’s central province of al-Bayda on Thursday, a security official told Xinhua.

The U.S. airstrike targeted a motorcycle in Sawmaah district of al-Bayda province, leaving two al-Qaida militants killed on the spot, the local security source said on condition of anonymity.

According to the anti-terror Yemeni security source the dead included a local commander of the terrorist group.

The source said that nationalities or identities of the killed al-Qaida operatives are not known at this point.

Local residents confirmed that two missiles were fired from the U.S. drone on al-Qaida militants riding a motorcycle in Sawmaah area.

Yemen, an impoverished Arab country, has been gripped by one of the most active regional al-Qaida insurgencies in the Middle East.

The AQAP, also known locally as Ansar al-Sharia, emerged in January 2009. It had claimed responsibility for a number of terrorist attacks on Yemen’s army and government institutions.