You are here: Home / MidEastGulf / U.S. deploys more troops to Iraq for showdown with Islamic State 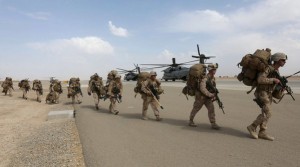 The U.S. and Iraq took a big step closer to a showdown with Islamic State fighters Wednesday as the Pentagon announced that 615 more U.S. soldiers are heading to Iraq in anticipation of the battle to liberate Mosul, Iraq’s second-largest city.

The move pushes the number of American troops in the country above 5,000 for the first time since 2011, when President Obama announced what he said was the end of the U.S. combat mission in Iraq.

Over 5,200 American troops will be on the ground working alongside Iraqi and coalition forces in the final push to drive out the Islamic State, also known as ISIS and ISIL. Mosul and the Syrian city of Raqqa are the two biggest cities held by the violent jihadi group that swept across the region two years ago.

The influx of troops will likely be the last before U.S.-backed Iraqi and Kurdish forces launch the long-awaited assault on Mosul. On Wednesday, Iraqi Prime Minister Haider al-Abadi characterized the additional U.S. troops, who he stressed would serve only as advisers and trainers, as the “final increase” needed before operations can begin, likely in mid-October.

“We emphasize that the role of the trainers and advisers is not combat, but for training and consultation only,” Mr. al-Abadi said in a statement. “It is our troops who will liberate the land.”

Gen. Joseph F. Dunford, chairman of the Joint Chiefs of Staff, said this month that all U.S. assets needed to support the Mosul operation would be in place by October — which could mean heavy fighting in Iraq while Americans head to the polls in early November.

Pentagon spokesman Capt. Jeff Davis declined to confirm a timeline for the assault but said the additional U.S. forces would “accelerate the campaign as we close in on Mosul.”

Administration officials estimate that 3,000 to 4,000 Islamic State fighters are hunkered down inside Mosul, part of the terrorist group’s more than 10,000-member force stretching all the way to Raqqa. An Islamic State defeat in Mosulwould, for all intents and purposes, end the two-year U.S. mission in Iraq.

“There are no other major objectives,” Capt. Davis said. “This is it.”

The political fallout from the Mosul fight could have major implications for the presidential election a little more than a month away.

Democrat Hillary Clinton and Republican Donald Trump have traded barbs over the state of the war against the Islamic State. A quick victory for the U.S. and its allies could boost Mrs. Clinton, while a stalemate or military reversal could help Mr. Trump, who once labeled President Obama and Mrs. Clinton the Islamic State’s “co-founders” because they failed to anticipate the terrorist group’s rise.

Iraqi forces retook Ramadi, Fallujah and other key conquests of the Islamic State within a matter of weeks, but Baghdad and Washington have warned repeatedly that the fight for Mosul will be more difficult.

U.S. military officials have refused to discuss any of the political calculations for the Mosul offensive, even on background. The deployment of more U.S. troops was “long anticipated and long planned” as part of the Mosulstrategy, Capt. Davis said Wednesday.

He said he could not rule out additional deployments if needed.

“Anything we do, we do with the permission of the government of Iraq,” Capt. Davis said. “Anything we do in the future [in Iraq] will be based on those parameters.”

Most of the 615 U.S. troops will support the fight to retake Mosul from al-Asad air base in Anbar province, about 100 miles west of Baghdad, and Qayara airfield, roughly 40 miles south of the Islamic State stronghold, Capt. Davis said Wednesday. They will handle the maintenance and operational logistics tied to U.S. air operations out of both bases, which will involve a massive uptick in activity once the Mosul offensive gets underway.

U.S. advisers are helping various factions construct small firebases and military camps encircling Mosul. The bases, in conjunction with a main U.S. military logistics hub in the tiny town of Qayara, will serve as jumping-off points for 14 Iraqi army brigades and thousands of Kurdish peshmerga and mostly Shiite militia fighters to advance on the city.

The remaining troops heading into Iraq will be split between military advisers working alongside local forces and “expanded intelligence resources” for the Mosul operation, Capt. Davis said.

Islamic State-held territory in Iraq and Syria dropped from over 48,000 square miles to 42,000 square miles — roughly the size of West Virginia — from December to July. With the loss of Fallujah and other areas surrounding Mosul, that territory has shrunk even more.

Last week, Iraqi forces recaptured the city of al Shirqat, 70 miles south or Mosul, which had been under Islamic State control since 2014. Planning has also begun to retake the Islamic State-held city of Hawijah, 50 miles east of Shirqat, which U.S. and Iraqi commanders say is the final step before the assault on Mosul.

Defense Secretary Ashton Carter, speaking to reporters while traveling in New Mexico, said the decision to press ahead with the deployment is a sign that the U.S. military is prepared to seize openings on the battlefield when they arise.

Even in advisory roles, he said, the U.S. troops will be deploying into a dangerous situation.

“We’ve said all along: Whenever we see opportunities to accelerate the campaign, we want to seize them,” Mr. Carter said, according to the Reuters news agency. Though Iraqi forces will be doing the fighting, “American forces combating ISIL in Iraq are in harm’s way.”