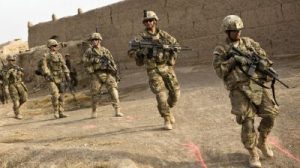 The United States military is considering sending up to 1,000 additional troops this spring, it was reported according to 1tvnews.af.

U.S. has already increased the number of its troops in Afghanistan by thousands to the level of 14,000, following a new strategy announced by President Donald Trump in August.

Washington Post said that the plan to send 1,000 additional troops has yet to be approved by Defense Secretary Jim Mattis.

New U.S. strategy for Afghanistan was announced amid deteriorating security condition in the country following the withdrawal of most of international troops in 2014.

“This is a concept that got accelerated for Afghanistan, and it has been quite a process,” the report cited an unnamed senior U.S. military official about the new deployment plan. “It has been a roller coaster”

A spokesman for top U.S. commander in Afghanistan said that U.S. Forces Afghanistan had not specifically asked for an increase in troops levels, suggesting an increase, if approved, would be considered an adjustment under the current plan rather than an increase associated with a shift in strategy.