You are here: Home / MidEastGulf / U.S. boots are back on the ground in Iraq for a massive mission to retake Ramadi 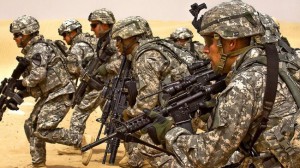 An 160-soldier strong American fighting force has arrived in Iraq in preparation for a decisive battle against Islamic State militants in the centre of the country, it has been claimed.

The battalion secretively arrived in the frontline province of Anbar, 70 miles west of the capital Baghdad, according to several local news outlets, who cited an unnamed Iraqi military official.

Although the U.S. is yet to confirm the reports, it would be the first time American group troops were deployed for combat in Iraq since forces were withdrawn in 2011. That said, several hundred U.S. soldiers are already stationed in Anbar but their work has been limited to training local groups.

The American fighting force is said to have arrived in Anbar on Sunday and has been stationed at Iraq’s Habbaniyah air base.

While there are already hundreds of U.S. soldiers at the base, the new arrivals are believed to have been dispatched purely to fight ISIS, rather than train locals.

One unnamed Iraqi military spokesman told the Al-Arabi Al-Jadeed news site: ‘The new forces’ mission does not appear to be training the Iraqi army or the tribes fighting with me. We expect that they will provide direct support in the upcoming battle to retake Ramadi.’

The long-planned Ramadi mission comes after ISIS forces seized Anbar’s provincial capital in mid-May in a demoralising blow for the local branch of the embattled Iraqi army, which had resisted the terror group’s advances in the region for over a year.

The city is of strategic importance not just because of its proximity to the regime-held capital of Baghdad, but also because it lies on the main road to the oil rich city of Mosul – ISIS’ main stronghold in Iraq and a major source of the terror group’s enormous income.

Speaking of the alleged deployment of the American fighting force, a leader of one of the major clans fighting ISIS in Anbar province said he was in favour of their arrival.

The troops’ alleged arrival in Anbar comes after fearsome Shia militias known as the popular crowd – who are also fighting against ISIS left the area – around Habbaniyah amid American pressure.

Al-Alwani was also quoted as saying that the ‘popular crowd’s presence in the province over the past months has hampered liberating it and delayed international aid, especially American aid.’

Last week U.S.-led Coalition warplanes bombed a Ramadi football stadium that was being used as a key ISIS supply hub.

‘The stadium was a key command and supply hub in the Ramadi region and was being used to store large amounts of homemade explosives, weapons and ammunition,’ a Coalition statement read.

‘Destroying this hub will significantly disrupt [ISIS’] ability to conduct operations and resupply their fighters in Ramadi,’ it added.

The news comes after sniper fire wounded the deputy head of Anbar’s provincial council as he visited military units west of the Iraqi capital last week, according to local officials.

Faleh al-Essawi was wounded south of Anbar capital Ramadi, which was overrun by ISIS in May, said fellow councillor Raja Barakat.

Army Colonel Walid al-Dulaimi said he was hit in the leg and was taken to a military hospital at the Habbaniyah base in Anbar.

Essawi is the latest in a long string of senior officials and officers to be wounded or killed in Anbar over the past year.

Two generals were killed in a suicide bombing in Anbar last month, while two heads of the Anbar Operations Command have been wounded this year.

The commanders of a division and a brigade were killed in Anbar in April, and the province’s governor was wounded in 2014.