You are here: Home / MidEastGulf / U.S. and Kurds preparing to open a major front in northeastern Syria 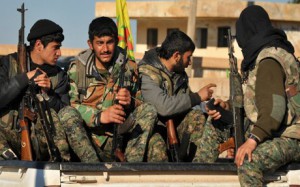 The American-led coalition fighting the Islamic State has begun preparing to open a major front in northeastern Syria, aiming to put pressure on Raqqa, the terrorist group’s de facto capital, according to military and administration officials.

President Obama last week approved two important steps to set the offensive in motion over the coming weeks, officials said. Mr. Obama ordered the Pentagon, for the first time, to directly provide ammunition and perhaps some weapons to Syrian opposition forces on the ground. He also endorsed the idea for an increased air campaign from an air base in Turkey, although important details still need to be worked out.

Together, these measures are intended to empower 3,000 to 5,000 Arab fighters who would join more than 20,000 Kurdish combatants of Syrian Kurdistan in an offensive backed by dozens of coalition warplanes to pressure Raqqa, the Islamic State’s main stronghold in Syria. Plans are also moving forward to have Syrian opposition fighters seal an important 60-mile part of the country’s border with Turkey to cut off critical supply lines of the Islamic State, also known as ISIS or ISIL.

As recently as Friday, Mr. Obama said he would take all steps necessary to combat the Islamic State in Syria and Iraq. The new approach relies on Arab fighters whose commanders have been screened by American forces and Kurdish fighters who are more battle-tested and whose loyalties Washington can count on.

The operation now being prepared would expand the Kurdish effort by adding Arab groups. In addition to increasing the number of anti-Islamic State fighters, the inclusion of Arab fighters eases Turkish concerns that the Syrian Kurds are becoming too influential in northern Syria.

The Arab wing of this ground force is called the Syrian Arab Coalition, a conglomeration of 10 to 15 groups whose total numbers range from 3,000 to 5,000 fighters, American officials said. They would fight alongside a larger Kurdish force in Syrian Kurdistan, (the Syrian northeast ) of as many as 25,000 fighters.

American military officials have screened the leaders of the Arab groups to ensure that they meet standards set by Congress when it approved $500 million last year for the Defense Department to train and equip moderate Syrian rebels. Most of the focus of that financing has been on an ill-fated Pentagon training program at sites in Turkey and Jordan that so far has fielded few fighters.

The administration’s plan is to support the Kurdish and Arab fighters and have them advance toward Raqqa, but not try to seize the heavily defended city itself. Rather, the aim is to isolate Raqqa and cut it off from travel and supply lines northeast and northwest of the city.

Under planning for the northern offensive, coalition air power at the Incirlik air base in Turkey would also be expanded. More nations could base aircraft there. Australia, France and Turkey have all recently starting flying strike missions against targets in Syria.

By gradually expanding the area of the coalition’s air operations, the administration could protect more American-backed rebel forces and possibly hem in Russia’s own operations, according to a European official and a senior American official.

The administration’s new plan, which was devised before the Russian buildup in Latakia, Syria, has not been coordinated with Russia, an administration official said, and the United States made it clear last week that its campaign against the Islamic State would not be thrown off course by the Russian strikes.

Gen. Lloyd J. Austin III, the commander of American forces in the Middle East, hinted at the emerging strategy last month, telling the Senate Armed Services Committee that over the next six months it would put “a lot more pressure on key areas in Syria, like the city of Raqqa.”

“Because of that access,” General Austin continued, referring to the use of the air base in Turkey, “we’ll have the ability to increase the pace and focus on key places in Syria. So that will certainly shake things in Iraq.”